Bus Éireann stoppage looms due to attacks on drivers 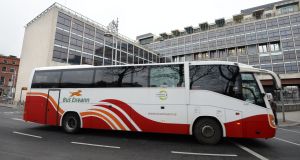 Bus Éireann passengers face not being able to board or disembark from buses at Busáras, the company’s main terminal in Dublin, at night-time from Monday week in a dispute over anti-social behaviour and attacks on staff.

The National Bus and Rail Union (NBRU) said its members would not engage in loading or unloading buses at Busáras after 8pm from September 16th unless the company provided additional security resources.

The union also warned, in a letter to Bus Éireann management, that if there were any assaults on staff in the meantime the beginning of the ban could be brought forward.

The NBRU is also seeking changes to Bus Éireann policy to remove responsibility from drivers for dealing with free travel passes presented by passengers where the validity is in doubt. The union wants this role transferred to a dedicated revenue unit.

The union also wants to see the introduction of an “assault pay” scheme in Bus Éireann similar to that in place in Dublin Bus. Staff in Dublin Bus who are injured as a result of an assault on duty can apply to a tribunal to retain their full pay rather than lower sick pay payments while out of work.

NBRU general secretary Dermot O’Leary said in the letter to the company, dated September 5th, that the move followed an attack on a staff member on August 29th at Busáras.

“The assault on a Bus Éireann driver whilst loading the 126 Bus to Newbridge is symptomatic of the type of outrageous thuggery which is being witnessed on an almost daily basis across our public transport system,” he said. “This incident at Busáras is not the first attack on bus drivers at this location, there have been far too many over recent months.”

Mr O’Leary in his letter to the company also criticised what he said was the lack of adequate security measures at Busáras.

“Our members have informed us that the current security resource is completely inadequate. You are also reminded that the supervisory resource at Busáras, is not there to ‘police’ the bus station.”

He said the union finds the situation “untenable”.

“Particularly when the issue of anti-social behaviour and downright thuggery has been well documented over the last number of years: whilst our campaign for a dedicated Garda public transport division continues unabated, we now require urgent and immediate action from Bus Éireann.”

What are drivers enduring?

Bus Éireann said on Friday the safety and security of customers and staff was of paramount importance.

“Busáras has extensive CCTV cameras throughout the bus station as well as 24-hour security personnel on site and we will continue to work and engage with the trade unions on this matter.”

At its conference in August, the union maintained the transport sector was facing an “epidemic of violence” against staff which could mean bus and rail services curtailed in some areas.

The union said bus and rail services could be withdrawn from what it described as “particular black spots” from October 14th, in advance of Halloween.

However, it warned services could be restricted before then if there are more attacks on staff or incidents of serious anti-social behaviour.

In examples of incidents experienced by its members in recent times the NBRU conference last month was told that a bus driver was kidnapped at knifepoint and forced to drive from Dublin to Drogheda.

Delegates also heard that in another incident, a bus driver in Wexford was assaulted and had the steering wheel grabbed by a passenger who had missed her stop. In this incident the driver lost a number of teeth.

The conference was told that a driver in Cork had been shot in the face with a pellet gun. And in Athy a driver was so badly beaten he was out of work for eight months. Delegates were told that in this incident it had taken five passengers to restrain the assailant.