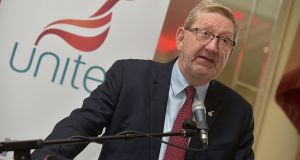 The UK’s “bungled Brexit” has hit all parts of the Irish economy with the North in particular reeling from its effects, the head of the Unite trade union Len McCluskey has said.

Without citing a specific source, Mr McCluskey said Northern Ireland had suffered a 54 per cent drop in investment as a result of the political uncertainty over leaving the EU.

“We know the impact this bungled Brexit has had on the economy across all parts of Ireland,” he told delegates at Unite’s policy conference in Malahide, Dublin on Tuesday.

“The last two years of Tory Brexit chaos have been hugely detrimental to Northern Ireland’s economy in particular.”

Mr McCluskey - who as head of the UK’s largest trade union is an influential backer of Labour leader Jeremy Corbyn - said that while Unite had campaigned to remain in the EU, there was no conflict in the current position.

Accepting the vote to leave the EU as an “inconvenient truth”, he said the priority now was to pursue the best deal possible and noted a soft Brexit was the obvious course given the tight referendum result and subsequent general election which proved disastrous for prime minister Theresa May’s government.

Asked about having a second vote on Brexit, which is favoured by many Labour supporters, Mr McCluskey said a general election was a preferential form of “people’s vote” in order to usher in a Labour government “so we can start talking about the issues that affect the everyday lives of our people”.

Unite has 1.4 million members in the UK and Ireland and Mr McCluskey said it was “inherently political” and that he was proud of its “radical” label.

Despite its close ties to Labour in the UK, however, Mr McCluskey said the party in Ireland had “utterly lost its way” as a consequence of its coalition with Fine Gael and the ensuing austerity policies.

“It was a disastrous decision for them. I don’t know what they were thinking of and of course they were subsequently punished by the electorate,” he told reporters.