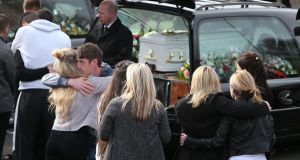 Louise Daniels led the processions of coffins into the Church of the Holy Family in Ballymagroarty in Derry, helping to carry the first one herself.

Inside the white box was the body of her youngest son, Evan, aged 8.

Next came the white coffin containing the remains of her other son, Mark, aged 12.

Then came the largest of the three white coffins, which contained the remains of her 14-year-old sister, Jodie Lee.

Finally, there were two larger, dark wood coffins containing the remains of her partner, Seán McGrotty, father to Evan and Mark, and her mother, Ruth Daniels.

All five family members had died when their jeep slipped off the pier in Buncrana, Co Donegal, on Sunday.

The coffins were placed one by one in front of the altar.

Dressed all in black, Louise, the life drained from her face, went to each, paused, lent down and kissed the lid.

Once finished, she went over to Davitt Walsh, who was sitting with his girlfriend, Stephanie Knox.

She threw her arms around him and hugged him for dear life.

Later in the funeral service she would thank him for swimming out to Seán’s sinking car and rescuing her only surviving child, four-month-old Rioghnach-Ann.

She would also demonstrate extraordinary grace under pressure when, in a clear, faultless voice, she recited a poem she wrote for the occasion.

A city stunned in silence,

the tragedy of a family gone

leaving so many in despair.

They went to watch the sunset,

together on Buncrana pier,

unbeknown to them all

an angel would be near.

Taken together as a family

joined as one at heaven’s door

a community left in mourning

Their faces will forever map the sea

remembered by each and every one.

Down by the lake of shadows

when you look beyond the sun.

This was not a funeral celebrating lives well-lived, which had reached their inevitable conclusion.

This was a funeral marking the end of lives that were cut needlessly short.

These people had lost a father, a brother, a son, a grandson, a grandfather, a mother, a daughter, a sister and a nephew, he told the congregation.

The priest said: “Louise, you are the most bereft of all because you have lost your family and our hearts go out to you especially.”

“We are plunged in grieving,” Fr O’Kane said, “even when we were closing the coffins an hour ago, the heavens wept.

“Five beautiful people have been taken tragically from our midst.”

Close to 1,000 people filled the church once the cortege arrived, greeted by a guard of honour of Derry City footballers, a gesture to Louise’s brother, Joshua (20), who is a midfielder for the team.

A similar number filled the church car park, where loudspeakers relayed the service.

The occasion was dominated by children - the children killed and their many school friends, including pupils from St Mary’s College, St Joseph’s Boys School, and St Eithne’s Primary School.

They filled many of the pews and provided music and song throughout the ceremony.

They played Sí Bheag Sí Mhór, Nearer, My God, to Thee, while the choirs sang The Lord Bless You and Keep You, Circle of Friends, We Come to You, Lord Jesus and Remember Me.

Throughout the service, a large flatscreen TV placed behind the altar played a slideshow of happy family memories - the slightly stiff shots of formal occasions, the lighter moments from holidays and from girls’ and lads’ nights out.

Symbols of the lives lost were brought forward: a red football for Evan and a letter written to him by his classmates; Mark’s school project, a castle fort made of polystyrene and cardboard.

They brought, too, a cross that had been made for him by his classmates.

For Jodie Lee a photo of her heartthrob - the singer Justin Bieber; for Ruth, a trinket box; and for Seán, a Celtic football club jersey.

Fr O’Kane described going to meet the family and searching for what to say: “Words would not come to my lips to put any shape on what I felt inside.”

Instead, he described gripping the hand of Louise, “and as I kissed Louise on the cheek, I tasted the salt of her tears. ‘I am so, so sorry’ was all I could muster and I hope that it was enough.”

He said there are times when a person struggles with faith.

“You stand on the brink of emptiness in despair.”

He said he had broken down seeing the coffins. The silver ray of hope had been the saving of Rioghnach-Ann by Davitt Walsh.

In an instant, the congregation were on their feet, clapping thunderously.

In the eulogies for the children given by their teachers, Damien Harkin remembered Evan as a “beautiful, fun-loving boy with a big personality who loved school”.

Mark was remembered as a “teacher’s dream . . . quiet and hard-working and eager to please. . . always smiling, always generous”.

Another teacher, Marie Lindsey, told mourners that Jodie Lee had “inner beauty” and that “in 14 years, [she] lived a lifetime of love for friends. . . and for Justin Bieber”.

Jim McGrotty remembered his brother Seán for his “sheer determination to see anything he took on to completion”.

He said he “loved the craic and a bit of divilment” and was passionate about pigeon racing.

Before Louise read her poem, it was the turn of Joshua, who was Ruth’s son.

He spoke of his mother as “a very loving and kind woman.

“Everything we achieved was for her and everything I will become will be because of her,” he said as he broke down, unable to say more.

Louise read her poem and she thanked Francis Crawford and his wife, who called the emergency services after the incident; all those who tried to help; and Davitt Walsh.

Before the final journey to the city cemetery, Bishop Donal McKeown searched for something positive.

The tragedy had tapped into “a great wellspring of goodness”, he said.

He urged young people to remember that their lives were “precious beyond measure” and that “love and life are stronger than death”.

And then they carried them out again.

Louise carried the children’s coffins with all-female pallbearers, followed by Seán and Ruth, who were carried by men.

The hearses were lined up, side-by-side in the church car park.

Hundreds of people stood outside. Few of them were not in tears. All were grim-faced.

The schoolchildren, neatly uniformed, some carrying single-stem white roses, formed a guard as the cortege left for the city cemetery.

There, under a grey sky, Seán and his sons were lowered together into a single grave, and Jodie Lee and her mother Ruth were laid to rest together beside them.