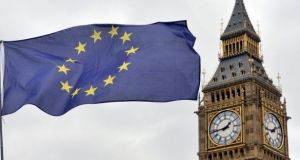 A new report disputed the British government’s claim the terms of the Withdrawal Bill would not result in a loss of rights. Photograph: Getty Images

Any diminution of rights as a result of Brexit would undermine the British government’s credibility and threaten peace in Northern Ireland, a group of London-based lawyers has warned.

In an 80-page report published on Thursday, the group said the people of Northern Ireland who hold Irish passports and are entitled to hold Irish citizenship must continue to enjoy their rights under the Belfast Agreement and as EU citizens.

“Any other approach would not only endanger peace and stability, it would undermine the UK’s credibility as a diplomatic partner,” they warned in their report on the human rights implications of British withdrawal from the European Union.

The report by lawyers from Doughty Street Chambers – Caoilfhionn Gallagher QC and solicitors Angela Patrick and Katie O’Byrne – was commissioned by the European United Left/Nordic Green Left (GUE/NGL) group of the European Parliament which has 52 MEPs, including Sinn Féin’s four MEPs.

The authors argued that Brexit supporters who have dismissed the agreement as an “easily dismantled hurdle to a clean break” from Europe have rightly been derided.

“Throwing away the GFA [Good Friday agreement] would breed more contempt than confidence,” they said. “The UK government agreed in December 2017 that a solution must be found for Northern Ireland which respects the terms of the GFA and which preserves the rights of the Northern Irish people, including as citizens of the EU.

“The binding nature of the UK’s international law obligations under the GFA requires no less.”

The report said an “off-the-peg” solution would not be sufficient for Northern Ireland. “A solution will not be easy, but it will not be achieved by abandoning the UK’s international law commitments and its respect for the rule of law,” it said.

Post-Brexit, there is a risk that Irish nationals living in Northern Ireland will be disenfranchised from their rights to democratic participation in the EU

The report disputed the British government’s claim the terms of the Withdrawal Bill would not result in a loss of rights. It was clear Brexit would give rise to complex and unparalleled challenges, both legal and political.

“While it is agreed that all the people of Northern Ireland will retain the right to hold Irish [and therefore EU] citizenship even after Brexit, if they so choose, it is not clear how continued practical protection can be achieved for their rights beyond citizenship currently protected by EU law,” the authors said.

“Post-Brexit, there is a risk that Irish nationals living in Northern Ireland will be disenfranchised from their rights to democratic participation in the EU,” they warned.