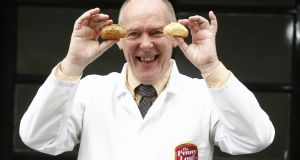 Cathal O’Donohue, who started out in 1989 when he came to Tullamore. Photograph: Conor McCabe 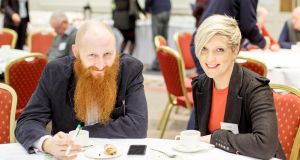 Niall Kavanagh and Louise O’Donohue from The Penny Loaf Co.

The mini loaf made by O’Donohue’s Bakery in Tullamore is a beautiful little creation, visually appealing, innovative and ticking every “healthy food box” imaginable.

And the tiny yeast-free soda “penny loaves”, weighing just 55g each and produced by fourth-generation family bakers in Offaly, are selling well in the United Kingdom.

Blast frozen to -18°C within 2.5 hours of coming out of the oven, the loaves have no additives or preservatives and are made to age-old recipes using traditional baking methods and Irish ingredients.

When they reach the restaurants, hotels and catering firms they supply, the loaves are thawed and served, explains sales manager Louise O’Donohue: “Once thawed naturally, they have a shelf life of up to 3 days, resulting in zero wastage.”

Launched in 2015, O’Donohue’s have worked hard to build recognition for the product with the busy UK restaurant, hotel and catering trade, though being so close to market has helped greatly.

The efforts are bearing fruit, with the backing of a major distributor, Central Foods in Collingtree, Northampton: “Once people are made aware of it, they like it,” O’Donohue declares.

In 1879, her grandfather opened the family’s first shop in Charlestown, Co Mayo. Her parents Cathal and Frances, still working, started out in 1989 when they came to Tullamore: “I’m the fourth generation!” declares O’Donohue.

Brexit impact is “an unknown land”, she says, as nobody really knows what will happen. “We educate ourselves as best we can, in preparation,” she tells The Irish Times.

Priorities have been set, though. The first is to collaborate with customers to help build relationships in hope that they can then deal with any issues that arise. “We put ourselves in their shoes,” she goes on.

Currency fluctuations have always been an issue. O’Donohues, which has 30 employees, have been advised to plan over three years for the worst in the event of a hard Brexit. They are putting money aside to weather uncertainty.

“Every day they check the price of sterling,” O’Donohue says, who is attending workshops hosted by Enterprise Ireland and Bord Bia, whose “Brexit Barometer” has been a useful way of calculating risks.

To reduce risk, the O’Donohoes hope to launch into other markets later this year, but the attraction of the British market, a market on Ireland’s doorstep, remains strong.

“The UK is just a hop, skip and jump across the way. It has a population of 65 million people. While Brexit is a challenge, we are intent on making it work as we see it can also be an opportunity,” she says. 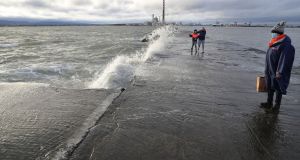