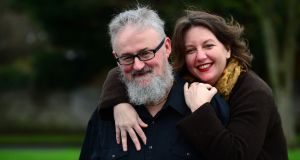 The British government has lodged a subpoena with Boston College seeking access to taped interviews given by former IRA prisoner Dr Anthony McIntyre, it was stated on Monday.

Ed Moloney and Wilson McArthur, who were centrally involved with the Belfast Project - an oral history of the Troubles - said that the British government, acting on behalf of the PSNI and the office of the North’s Director of Public Prosecution, had served a subpoena on Boston College seeking access to Dr McIntyre’s personal interviews.

Former director of the project Mr Moloney and Mr McArthur, who interviewed former UVF members for the oral history, accused the authorities of engaging in an illegal “fishing expedition” in seeking access to Dr McIntyre’s tapes.

Boston College’s spokesman Jack Dunn said that the “subpoena was issued in proceedings that the United States District Court ordered sealed, and Boston College was requested to treat the proceedings and the subpoena as confidential”.

“Nevertheless, the university notified Mr McIntyre of the subpoena because it concluded that he should know that his materials had been requested. Given that the pending proceedings remain under seal, Boston College is not able to comment further on the matter,” added Mr Dunn.

Historian Dr McIntyre, who served time in prison on an IRA murder conviction, and Mr McArthur respectively interviewed 26 republican and 20 loyalist former paramilitaries for the project.

Dr McIntyre also gave an interview about his IRA involvement during the Troubles to another interviewer as part of the project.

Interviewees were given commitments that there would be no disclosure of their interviews until after their deaths. Two of those who gave interviews were former senior IRA figure Brendan Hughes and former UVF member and Progressive Unionist Party leader David Ervine.

After their deaths their testimonies were included in a book by Mr Moloney called “Voices From the Grave” which contained information from Mr Hughes about the IRA’s abduction, murder and disappearance of Jean McConville in 1972.

Subsequently, as part of its investigation of Ms McConville’s murder the PSNI sought access to the Boston tapes. Ultimately under legal pressure Boston College handed over a number of tapes that are believed to contain reference to Ms McConville.

The release of the tapes also resulted in the arrest of veteran republican Ivor Bell (79) who also engaged with the project. He is charged with aiding and abetting in Ms McConville’s murder as well as membership of the IRA. His trial has yet to take place.

“This action by the DPP and PSNI is simply a fishing expedition, which is prohibited by international law,” said Mr Moloney and Mr McArthur.

“We do know, in particular, that this request does not have anything to do with the disappearance and murder of Jean McConville, which was the event that motivated this PSNI trawl five years ago,” they added.

“The subpoena request provides no details of specific charge, investigation or offence of which Dr McIntyre is accused, no names of alleged victims, no dates, no places. Instead the originators of this shoddy document mention matters which are so over-broad, that literally anyone alive during the Troubles in Northern Ireland could be accused of some association with them,” said Mr Moloney and Mr McArthur.

They added that Dr McIntyre has engaged Belfast human rights solicitor Kevin Winters “to resist these efforts to raid his personal memoirs”.

Mr Moloney and Mr McArthur said the arrest and charging of Mr Bell was an “abuse of process” as was the action against Dr McIntyre. They called on the Irish Government “not to co-operate with the British authorities should any effort be made to extradite Dr McIntyre from his home in Drogheda to Belfast for the purposes of yet another futile and inordinately expensive show trial”.

They added that the DPP and PSNI had requested, and the US Department of Justice had agreed, to a “demand that Boston College keep these legal proceedings secret, away from the prying eyes of the international press”.

The PSNI said it was not “commenting on the matter” while the DPP’s office was not in a position to comment at this stage. At the time of writing there was no response to queries from the Northern Ireland Office.