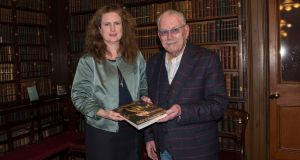 Grace Brady of the famine museum at Quinnipiac University, Connecticut, with Robert Ballagh at the launch of ‘In The Lion’s Den, Daniel MacDonald, Ireland and Empire’ by Niamh O’Sullivan at the RIA, Dublin. Photograph: Brenda Fitzsimons

In 1847 the London-based British Institution displayed a harrowing painting, An Irish Peasant Family Discovering the Blight of their Store, the first – and last – known contemporaneous painting of the Great Famine.

The painter was Daniel Macdonald (1820-1853), a young Irish artist recently arrived in the British capital.

Despite the emotional and historical nature of the painting, Macdonald was in danger of being forgotten until last month, when the picture became the centrepiece of an exhibition in Ireland’s Great Hunger Museum, at Quinnipiac University in Hamden, Connecticut.

In the Lion’s Den: Daniel Macdonald, Ireland and the Empire opened in January to much acclaim, while a book of the same name written by the museum’s curator Niamh O’Sullivan was also published.

The book, from Cork University Press, was launched in Dublin last night by the artist Robert Ballagh.

Ballagh described O’Sullivan’s work as “an extraordinary act of recovery” of Macdonald’s life and reputation. The author had diligently “reconstructed Macdonald as a very important artist of the 19th century”.

Macdonald made his debut as an artist at the age of 13, and less than 20 years later he was dead. But, according to Ballagh, O’Sullivan sheds new light on the social and visual culture of Ireland in the years leading up to and including the Famine.

Themes rarely visited by Irish artists – rural agitation, superstition and folklore, as well as aspects of the national character – were given spirited treatment by Macdonald, who insinuated such subject matter into the salons of metropolitan London.

Simultaneously courted by the aristocracy, and loyal to his Cork roots, his responses to the conditions in which he grew up and became an artist of distinction have not been told before.

As well as being curator of the museum, O’Sullivan is professor emeritus of visual culture at the National College of Art and Design, Dublin.

In the Lion’s Den: Daniel Macdonald, Ireland and Empire is published by Cork University Press, priced €29.