Book of condolence opens for Muhammad Ali in Ennis 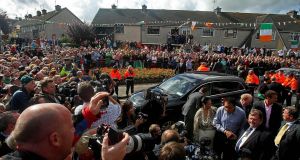 “Even though Muhammad Ali was a distant relative, he was always in our family. It is very sad that he is now gone.”

They are the words of Imelda O’Grady, Ennis-based relative of the boxing legend, who was one of the first to sign a book of condolence for Ali opened at the offices of Clare County Council on Tuesday in Ennis.

Distant relatives of the former world heavyweight champion shared their memories with others who were in Ennis back in September 2009 when Ali arrived in the town to celebrate his ancestral links to Co Clare.

Ali was named the first Honorary Freeman of Ennis and the town’s outgoing mayor Cllr Pat Daly confirmed that both himself and acting chief executive of the council Ger Dollard will travel to Louisville this week for Ali’s funeral.

Ali’s ancestor, Abe Grady, emigrated from Co Clare to the US in the 1860s and Ali has been most closely identified with the Turnpike area of Ennis where shop assistant, Ms O’Grady hails from.

Ms O’Grady said: “I sent off a letter today to the Ali family expressing my sorrow saying that the last time we were together was a celebration and how sad I was today.”

She said every year since meeting Ali in 2009, she has sent Ali anniversary cards of his time in Ennis and birthday cards as well.

She said: “I am so delighted that I got an opportunity to meet him. It was the opportunity of a lifetime.”

Another Ali relative, Mary O’Donovan said: “It is the passing of a hero, but I am happy to be able to remember that I can say that I met my hero and a giant of a man.”

Recalling Ali entering the Ennis Town Council chamber back in 2009, Ms O’Donovan said: “We thought he was going to come out in a wheelchair and everyone got a shock to see him walk out. We didn’t think he was capable as he had done so much since he left home and that he would be exhausted.”

On the day, Ms O’Donovan presented Ali with a family tree and a history of the Turnpike area and the O’Grady name.

She recalled: “I was showing him different pages and he was so interested.”

By lunchtime on Tuesday , six pages of the book of condolences had been filled with the signatures of well-wishers from across Clare.

The book will remain open until 5pm on Friday.