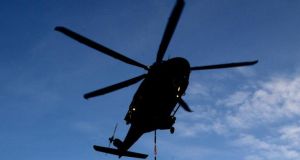 Gardaí are to prepare a file for the Coroner’s Court following the completion of a postmortem on the body of a 69-year-old fisherman recovered from the sea off west Cork on Tuesday morning.

The man, named locally as Michael O’Brien from Rossbrin in Ballydehob, had gone missing during a fishing trip in his small boat from Rossbrin Pier on the Mizen Peninsula on Monday morning.

Mr O’Brien had left at about 11.30am and was seen fishing near Long Island around 2pm on Monday but when he failed to return home at 7.30pm, his family contacted the emergency services.

Several local fishing boats as well as pleasure craft also joined in the search which was co-ordinated on scene by the LÉ Orla which has been on patrol off the west Cork coast.

Mr O’Brien’s boat was located near Goat Island at around 8.30pm on Monday and the search was concentrated in this area.

The search continued until 1.30am on Tuesday but resumed at 6am with an Irish Coast Guard helicopter carrying out several sweeps of the sea along the Mizen.

At around 11.10am a local boat, St Brendan, spotted a body in the water near Ballydevlin outside Goleen and the Schull boat proceeded to the scene.

The body was recovered at an area in Goleen Bay known locally as the Amsterdam Rocks and brought his remains back to Schull where he was pronounced dead.

Mr O’Brien’s body was formally identified by family members and taken to Cork University Hospital where a postmortem was carried out yesterday afternoon before he was released to the family.

Gardaí say that they are treating Mr O’Brien’s death as a tragic accident and will now prepare a full file on his death for an inquest at the west Cork Coroner’s Court.

Supt Brendan Fogarty of Bantry Garda station expressed his sympathies to Mr O’Brien’s family and paid tribute to all those who participated and assisted in the search.

“We got great support from agencies like the Irish Coast Guard, the RNLI, the Schull Community Rescue boat and various local Irish Coast Guard units as well as dozens of local people,” he said.

“They came out in their droves to help in the search on Monday night and again on Tuesday morning with countless people coming down with food and beverages for everyone involved in the search.”

Independent TD Michael Collins, from Schull, also paid tribute to the rescue efforts as he sympathised with Mr O’Brien’s family.

“My sympathies and those of the people of the Mizen Peninsula are with Michael O’Brien’s family – it’s a tragic loss for them to lose their loved one out on a fishing trip like this,” he said.

“But the people here on the Mizen Peninsula worked tirelessly well into Monday night with the Coast Guard, the RNLI, the local search and rescue groups and the Civil Defence to try and find him.

“And they were out again on Tuesday to help with the search and thankfully he was located and recovered so while it’s a huge tragedy for his family, at least they have a body to bring home.”