Body of Emma Mhic Mhathúna taken to her home in Kerry 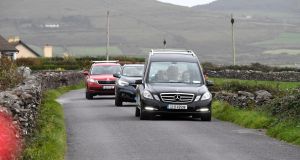 The coffin of the late Emma Mhic Mhathúuna being taken to her home in Ballydavid, Co Kerry. Photograph: Domnick Walsh

The body of Emma Mhic Mhathúna, who lost her battle against cervical cancer on Sunday, has been taken back to her home in Kerry.

A Garda patrol car escorted the hearse carrying the remains of the mother of five from Kerry University Hospital in Tralee to her home at Baile na nGall on Monday afternoon.

Her funeral Mass is to take place at Dublin’s Pro-Cathedral on Wednesday.

It will be preceded by a Mass at Séipéal na Carraige, Baile na nGall (Ballydavid), Co Kerry at 11am on Tuesday.

Her remains will then be brought to Dublin for funeral Mass on Wednesday at 12.45pm followed by a burial afterwards in Laraghbryan cemetery in Maynooth, Co Kildare.

Her funeral notice published on rip.ie describes her as a “most precious mother and best friend” to her children Natasha, James, Mario, Oisin and Donnacha.

An only child, she is predeceased by her mother Annette and is survived by her father Peter, aunts, uncles, god-daughter, cousins, relatives, neighbours and friends.

Ms Mhic Mhathúna was diagnosed with cervical cancer in 2016, having previously received two incorrect smear-test results. She had sued the HSE and US laboratory Quest Diagnostics Incorporated and was awarded €7.5 million last June.

In a statement released on Sunday, Ms Mhic Mhathúna’s family said she battled her illness with great valour and passed away peacefully “in the comfort of her family’s loving embrace in the knowledge that she had helped to shine a light on important issues which affected not just her own life, but lives of many others”.

A second woman died as a result of the cervical check scandal at the weekend.

Campaigner Vicky Phelan said the woman, who wishes to remain anonymous, was called Julie and she died on Saturday morning.

Ms Phelan settled a High Court action against a US lab in April after her cancer was missed in a smear test three years before she was diagnosed with the disease.

The test was taken as part of the CervicalCheck programme.

The missed smear test was discovered in 2014, after her cancer diagnosis, but she was not told about it until 2017.

Stephen Teap, whose wife Irene died from cervical cancer a year ago, has paid tribute to Emma Mhic Mhathúna.

“It was heartbreaking to hear of her passing,” he told Newstalk Breakfast.

“She was a very brave and courageous woman. Another mother leaves this world, leaving five children behind.

“She fought for her children. She knew she was going to die and she fought for answers. She took the fight to them.”

He said that what himself, Ms Mhic Mhathúna and Vicky Phelan had done was to highlight the mistakes that were made in the CervicalCheck service.

The key now is to “fix the screening programme” in a system that was “doomed to fail”.

Phil Uí Bhrosnacháin, post mistress in Baile na nGall until the post office closed its doors there in September, was Emma’s next door neighbour, and spoke of first meeting her in a special edition of An Saol ó Dheas on RTÉ Raidió na Gaeltachta on Monday.

“I remember the first day she walked in here, I’ll never forget it. She had the five kids with her, with her blonde hair and an orange jacket, and I thought to myself who is this beautiful woman ... She told us she was looking for a house, so she put up a sign, and she got a house then next door. That’s my first memory of her,” the former post mistress said.

“She used to be in and out to us all day and night! I was very fond of her... and I used to be giving out to her telling her she’d brought the TV cameras on us, and that she had the (village) put upside down, and she’d be laughing.

“She was a wonderful woman, and she did so much for her children, that’s all she was thinking of .. and she was so funny, we’d always have a laugh. She could be in to us five or six times a day, and I’d be saying to her ‘what is it now Emma’ and she’d start laughing.

“She was fearless, and she spoke the truth all the time, and do you know I never thought this day would come ... she had so much energy, I suppose I just didn’t believe it ... She was very content here ... She used to go up to Dublin, and then when she’d come back here she’d say I’m home now.”