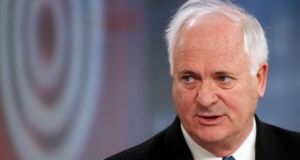 Politicians today could learn from the career of the late Charles Stewart Parnell the value of “discipline and unity” and the importance of turning a crisis into an opportunity, former taoiseach John Bruton has said.

Delivering the annual Parnell Commemoration Lecture at Glasnevin Cemetery on Sunday, Mr Bruton reflected on the ongoing Brexit negotiations and also on the failure to form a new Assembly in Northern Ireland.

The Parnell Society commemorates Parnell’s death on “Ivy Day” the first Sunday in October nearest to the date of his death aged 45 on October 6th, 1891.

Parnell was buried in Glasnevin after one of the largest funerals ever witnessed in the capital.

Mr Bruton said one of the lessons we could learn from Parnell’s career that was relevant today, was the value of “discipline and unity” in the political process.

“Under Parnell, the Irish Party became a disciplined, pledge-bound party,” he said.

“If the Irish representation in Westminster in the 1880s consisted of 100 independent MPs, they would have achieved very little and been picked off one by one.”

“Likewise, if at any time in the future Dáil Éireann has to make difficult decisions and make them quickly, it needs discipline and united political parties that can do difficult things in a united way,” he said.

Mr Bruton said Parnell had rejected the idea that MPs would secede from Parliament, appreciating that such an action, especially at a time of crisis, would be “counterproductive”.

Mr Bruton said every vote would count in Westminster when decisions had to be taken on Brexit, and on “whether the people of the United Kingdom are to be consulted again on whether they want to go ahead with it, when they actually know for the first time what it really means”.

On the challenges we were facing in the future, Mr Bruton said he believed it was very important that the commemoration of the War of Independence – “the first Irish civil war, as I would call it” – as part of the State’s Decade of Centenaries, should remember those who fought on the “unsuccessful side”.

“Commemoration is about reinterpreting who we are so that we can live well in the future, and making sure that any senses of identity or interpretations of history that might prevent us from living well in the future are confronted and dealt with. I think this is an opportunity as well as a challenge,” Mr Bruton said.

He said he lamented the failure of the two major parties in the North to operate the Belfast Agreement.

“We have an ironic situation whereby the Irish Government and the European Union is fighting for the Good Friday agreement and respect for it and the people whom its designed primarily to enable to live in peace are not operating it in their own jurisdiction,” Mr Bruton said.

Mr Bruton later laid a wreath at Parnell’s grave and delivered a short graveside oration accompanied by the chair of the Parnell Society, Dr Pauric Travers.