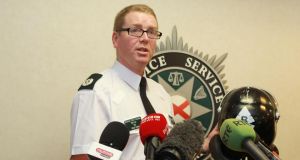 Belfast suffered a fourth night of violence last night with blast bomb attacks in the north and east of the city. Several hundred protesting loyalists also gathered at Twaddell Avenue close to the Ardoyne shops in north Belfast as police lines kept loyalists and nationalists apart. Motorists were advised to avoid the area.

At least one blast bomb or pipe bomb device was thrown at police officers from a nationalist area in north Belfast at tea-time yesterday. No one was injured in the attack which was condemned by Sinn Féin, the SDLP and the DUP.

PSNI superintendent Emma Bond said: “We consider ourselves extremely fortunate that we are not dealing with a much more serious incident and that all of the officers were able to walk away from that situation unharmed.”

Police appealed for calm in the area and called “on those with influence to do what they can to help restore calm”.

The Orange Order, following nights of loyalist violence in north Belfast, has insisted it will not be “scapegoated” for the trouble in the city over the Twelfth of July period.

North Belfast remained tense last night with police on high alert. The PSNI said yesterday evening an object was thrown at police from the nationalist Brompton Park area in Ardoyne while Crumlin Road near the Woodvale Road and Ardoyne shops flashpoints was closed to traffic. Local unionist and nationalist politicians said the object appeared to be a pipe or blast bomb type device.

In Derry, in suspected nationalist attacks, paint was splashed on St Augustine’s Church of Ireland church, the Apprentice Boys of Derry Memorial Hall and on the First Derry Presbyterian Church.

‘Visceral’ and ‘animalistic’
PSNI assistant chief constable Will Kerr said some of the violence perpetrated by loyalists and some Orangemen on the night of the Twelfth at Woodvale Road was “visceral” and “almost animalistic”. Mr Kerr, who is in charge of the parading security operation, said the attacks amounted to “attempted murder”. More than 40 officers were injured in the violence.

As recriminations continue, the Northern Assembly is recalled from its summer recess today to debate a DUP motion on the Parades Commission decision to ban Orangemen marching past the flashpoint Ardoyne shops.

While Chief Constable Mr Baggott has described the actions and comments of some Orange leaders as “reckless”, the order was in defiant mood. Orange Order chaplain, the Rev Mervyn Gibson, said the order would “not be scapegoated for where the responsibility for this crisis truly lies – at the door of the Parades Commission” .

Sinn Féin president Gerry Adams said the way forward was for the order to talk directly to nationalist residents’ groups about disputed parades and also to talk to Sinn Féin.

A DUP delegation met senior PSNI officers to discuss the trouble yesterday. Afterwards, DUP Minister and North Belfast MLA Nelson McCausland said the right of peaceful protest was fundamental in any democratic society. “Yes, the people who throw bricks or missiles are wrong but so are the Parades Commission,” he said.

In the Seanad yesterday Senator David Norris called for the Church of Ireland to dissociate itself from the Orange Order in the wake of the rioting.