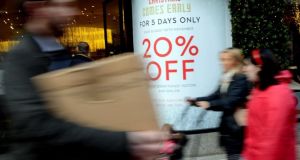 It was sedately busy on Dublin’s Henry Street, as shop workers relished being “rushed off their feet” after spending a long and recessionary time kicking their heels.

At the same time, Black Friday was inspiring insurrection in the English suburbs as punters wrestled with each other to secure bargain flat-screen TVs.

One customer took to Twitter to report that taking part in the “carnage” of Black Friday had got “£30 off a £100 coffee machine”. That’s the same as €37. Possibly a high price to pay for loss of dignity?

In Dublin city centre, things were a little better spirited. In Christian merchandisers Veritas, nothing was being tainted by “Black” thoughts.

You could bundle together Pope Francis’s The Joy of the Gospel with The Family Prayer Book and Daily Joy, and only pay for two of them.

Every Friday is a good Friday on Lower Abbey Street.

Rose Balfe, from Castleknock, was just “browsing” in Clerys on O’Connell Street.

She didn’t think she’d be buying too much “whether it’s a Black Friday, a white Friday or any other type of Friday”.

She only heard about the day yesterday. “I don’t think it’s that big yet,” she said.

Black Friday is another US import that some Irish retailers hope will do the business. Last year, 141 million US consumers spent a total of $57.4 billion the day after Thanksgiving. The numbers will no doubt be crunched here too.

In Britain, they are embracing the concept of a single Black Friday; here, we are making it last at least until next week. Dunnes Stores is offering 20 per cent off until Sunday. Arnotts and Brown Thomas are also offering sales until Sunday.

Stores owned by English companies, but trading on the streets of Ireland, are upfront in their promotion of the sales pitch.

HMV on Henry Street opened its doors to more than 30 eager customers at 9am. The pseudo-emergency tape and Black Friday sign at the door pulled in the punters.

Richie Owens, the branch’s assistant manager, proudly showed off his discounted televisions. No one wrestled him to the ground.

Owens is a good salesman. By the time he’d walked me through HMV’s discounts, I really wanted some Beats by Dre headphones and a Breaking Bad box set. I need neither.

“I think the idea of Black Friday is to drive consumer traffic,” said Owens. The store was full of people. We agreed that it had worked.

In Debenhams, a message on the tannoy informed customers that “It’s Black Friday. But hurry, it’s only while stocks last.”

Sandra Hennessy from Swords was in town having her hair done.

She planned to get back to Swords to buy an iPad and was hoping that the greatest reduction show on Earth would have spread further north.

She only found out about Black Friday when she got into town, but she planned to do a lot more shopping before she left.

On O’Connell Street, a truckload of Dublin Corporation men were putting shiny bows on the municipal tree.

They were doing a great job and smashing stereotypes, if not baubles, as they went.

Gender stereotypes took a seasonal nosedive all over town as men proved that they were well capable of shopping.

Superdry and Levis in Arnotts were full of boys and Topman had a fine male contingent on show.

A few directional girlfriends seemed to be dangling checked shirts in front of blushing boys, but all’s fair in love and merchandising wars.

I went off to see if I could find a friend. I got distracted. I bought a bag. There was 20 per cent off.

It would have been wrong to arrive back the office empty-handed. It was Black Friday after all.