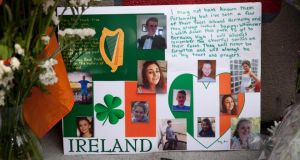 A message left near the scene of the balcony collapse which killed six Irish students in Berkeley, California: Fr Brendan McBride said he was heartbroken for the suffering of the families of those affected by the tragedy. Photograph: Peter DaSilva/EPA

The Irish students who died in Berkeley last week were remembered with the African American shooting victims in South Carolina at a memorial Mass in San Francisco.

The Mass was celebrated by Archbishop of San Francisco Salvatore Cordileone at the Cathedral of St Mary of the Assumption on Cathedral Hill.

Minister of State for the Diaspora Jimmy Deenihan attended the service, accompanied by Irish Ambassador to the United States Anne Anderson, Irish Consul General for the western US Philip Grant and Deputy Consul Kevin Byrne.

Fr Brendan McBride of the Irish Immigration Pastoral Centre, who this week helped the families of the six deceased students and the seven injured, said he was heartbroken for the suffering of the families of those affected by the tragedy.

“Somebody said to me today, ‘How are you?’ I would say that my heart is broken, broken for the suffering of these families over the past week,” he told hundreds of people in the congregation, including many Irish J-1 students living in San Francisco.

They were remembered at the San Francisco cathedral with the nine people killed by gunman Dylann Roof (21) at the Emanuel African Methodist Episcopal Church in Charleston, South Carolina the night after the Berkeley tragedy.

Ms Donohoe, an Irish-American citizen of Dublin parents, was laid to rest near her hometown of Rohert Park, north of San Francisco, yesterday. Ms Burke’s family brought her remains back overnight, flying out of San Francisco Sunday evening.

They followed the remains of Mr Culligan, Mr Schuster, Mr Miller and Ms Walsh who arrived back in Dublin Sunday morning.

“Yesterday we saw four bodies go home, the funerals yesterday and tomorrow another body going home. It is all heartbreaking, moving stuff. We are just so helpless in the face of this tragedy. We continue on to support the families that are here,” he said. “We ask you to continue to pray for them and to support them until all of them can go home to Ireland and be in a safe place.”

Fr McBride said that he was praying for the injured, who are all from Dublin: Hannah Waters and Aoife Beary who are being treated in Highland Hospital in Oakland; Clodagh Cogley, Niall Murray and Sean Fahey in the Eden Medical Centre in Castro Valley; and Jack Halpin and Conor Flynn who are in John Nuir Hospital in Walnut Creek.

“We pray for them and the medical teams who are caring for them,” said Fr McBride. “They have been absolutely fantastic. They have opened their hearts and their doors to us every day.”

Fr McBride said the Irish in San Francisco were “extremely grateful to the archbishop and to the entire city for “wrapping their arms of love around our community”.

“When a tragedy like this happens, 5,000 miles from home, we are dealing with a tyranny of distance. We are separated from family and friends at home by airports, by miles, by emotional barriers that cannot be solved by the social media,” he said.

He was particularly grateful for the support of his fellow priests in Berkeley this week, including UCD chaplain John McNerney and Oakland priest Fr Aidan McAleenan.

Speaking at the end of the Mass, Mr Deenihan said that he was praying especially for the parents of the six Irish students.

“[They] nurtured both mentally and physically for the past 21 years and helped them to become the individuals they became: intelligent, talented, highly motivated, ambitious and an outwardly looking young people,” he said.

“Together as families they enjoyed the childhood years, the challenging teenage years and more recently their young adult years.”

Mr Deenihan said they did all that families do: Go on holidays together, go to training, participate in Christmas pantomimes, school dramas and other activities. The parents had looked forward to seeing their children graduate from college, get a job and maybe have families of their own, he said.

“It was heartbreaking and heartrending to witness their sense of loss as they struggle to come to terms with the enormous cross they will have to carry for the rest of their lives. However, it was also inspiring to see them as parents console and comfort each other. They could only share that deep sense of loss and they did it with dignity.

The Minister, who left San Francisco for Denver on Sunday to attend previously scheduled engagements, asked the people of San Francisco to continue supporting the seven injured students “because they have a challenging time ahead of them in some cases because their injuries might life-changing.”

Mr Deenihan praised the estimated 800 Irish J-1 students in the San Francisco Bay Area, many of whom attended a night vigil for the dead in Berkeley on Wednesday night and other events in recent days to remember the six students.

“They have shown how sensitive and how caring the present generation of the Irish are now,” he said. “They have certainly given me great hope for the future of our country.”

The Mass was also attended by Chris O’Leary, the Lord Mayor of Cork who was in San Francisco, which is twinned with Cork, at a conference of mayors.