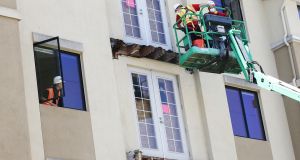 Workers look at the broken joists of a fourth-storey balcony that collapsed and killed six Irish students in downtown Berkeley, California, the US, in June 2015. File photograph: Jim Wilson/The New York Times

A number of US companies defending claims for damages from the families of the Berkeley balcony collapse victims and the seven survivors have sought any photographs that might have been taken by the students before the accident as evidence to build a defence in the legal actions.

Defendants have requested any photographs the students may have taken on phones, tablets or cameras that captured the balcony in the moments leading up to the tragedy.

They also want photographs of it taken in the days before the incident and any other evidence concerning the balcony.

The first anniversary of the tragedy falls tomorrow.

Five Dublin students and an Irish-American woman were killed on June 16th last year when a fifth-floor balcony in an apartment block in the California city collapsed during a birthday party.

The request for the information is sought under the discovery process, where both sides exchange evidence.

The parties have submitted a proposed order on “electronically stored information (ESI) discovery and the preservation of ESI evidence”, according to a case management filing submitted in court last month.

“This is typical information-collecting that occurs in all civil cases where each side is entitled to determine requests filed to the other side,” said San Francisco attorney Michael Kelly, who is representing 12 of the 13 Berkeley families.

The Berkeley families and students issued civil proceedings last year against the property’s owner and manager and about 30 other companies, claiming that they “cut corners to save money” and ignored “red flag warnings” about dry rot that caused the collapse.