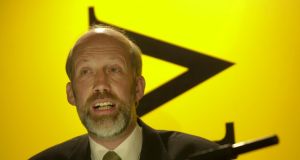 Alliance leader David Ford said the ‘negative DUP and Sinn Féin response to Alliance’s proposals’ for the programme for government ‘left the party leadership with no choice but to not nominate a Minister’. Photograph: Bryan O’Brien/The Irish Times

The SDLP leader Colum Eastwood has announced he is bringing his party into formal opposition while the Alliance leader David Ford said he is not in a position to recommend that his party take on the justice portfolio in the Northern Executive.

Last week Ulster Unionist Party leader Mike Nesbitt announced he was leading his party into opposition in the Northern Assembly.

The SDLP will now join the UUP in opposition although Mr Eastwood is not entering into any formal arrangement with Mr Nesbitt.

Mr Eastwood and Mr Ford by their statements on Thursday evening raised the possibility that the next Northern Executive which is due to be formed by next Wednesday will comprise solely of DUP and Sinn Féin Ministers.

The SDLP and Alliance leaders made clear that they were unhappy with the current draft programme for government.

“After a long two weeks, despite our best efforts, it has become clear that our ambition for a full programme for government will not be matched by the document currently constructed by the DUP and Sinn Fein, ” said Mr Eastwood.

“It is clear that the DUP and Sinn Fein are determined to put forward a framework that includes no action, that there is nothing they can be held accountable for or to,” added SDLP leader.

While Mr Eastwood appeared adamant that there was no turning back from the party decision there was some conditionality about Mr Ford’s statement.

Mr Ford said the “negative DUP and Sinn Féin response to Alliance’s proposals” for the programme for government “left the party leadership with no choice but to not nominate a Minister”.

Mr Ford however did not rule out the possibility of a change of mind should the DUP and Sinn Fein meet some or all of its demands in respect of the programme for government.

“It is clear we are not on the same page when it comes to seeking progress for our society,” said Mr Ford.

Neither First Minister Arlene Foster nor Deputy First Minister Martin McGuinness appeared to be perturbed by this turn of events. They held talks yesterday with the Greens leader Steven Agnew and with independent unionist Claire Sugden about the possibility of either of these MLAs taking on justice should Alliance hold to its current position.

Until now, the DUP and Sinn Féin exercised mutual vetoes respectively by refusing to accept a nationalist or unionist MLA in the post of Minister of Justice. Ms Foster has already stated she would not accept a Sinn Féin MLA running the justice department.

There was speculation at Stormont that as a last resort the DUP and Sinn Féin would have joint Ministers running the department or that that a DUP MLA would take the post for half of the five year lifetime of this Assembly and a Sinn Féin MLA for the other half.

There was also speculation that Sinn Féin might accept a DUP Minister in the post in return for some unspecified political concessions.

Seven of the Executive’s eight new departments will be appointed under the d’Hondt system of allocating departments based on the strength of each party while the sensitive justice department is appointed separately.

Northern Secretary Theresa Villiers already has warned that another Assembly election could be called if there is no agreement on the justice post.

Mr McGuinness said he and Ms Foster were “in control” in relation to the current political negotiations notwithstanding the opposition decisions by the UUP and the SDLP and the doubts over who would run the justice department.

“We know exactly what we are doing and we are very confident that come next Wednesday d’Hondt will be run in the Assembly, Ministers will be appointed and the Executive will meet on Thursday,” he predicted.