Barriers to ‘no consent, no sale’ Bill can be overridden, say legal advisers 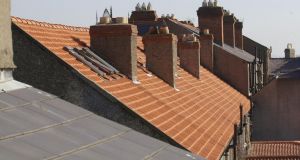 The strength of constitutional property rights has frequently been cited as a reason why the Bill cannot be progressed.

Constitutional barriers to a Sinn Féin Bill which would give mortgage owners a veto on the sale of their loan to a so-called vulture fund may not be as significant as previously thought, according to confidential legal advice given to an Oireachtas committee.

The strength of constitutional property rights, which also apply to contracts such as mortgages, has frequently been cited as a reason why the “no consent, no sale” Bill cannot be progressed.

However, a legal note given to the Finance Committee and seen by The Irish Times suggests that the infringement of property constitutional rights may be overridden by public interest and social justice exceptions which can be written into the Bill.

The advice, from the Office of the Parliamentary Legal Advisor (OPLA) notes that “the change in the law will impact upon an established property right, which may be an infringement of the Constitution’s property rights guarantees”.

However, it notes that there are limitations on the property rights in the Constitution, particularly in relation to how they interact with social justice issues and the “exigencies of the common good”.

If the Bill proceeds, it “would have to propose an approach that is a proportionate balance of constitutional rights in order to be compatible with the Constitution”, the advice states.

Legal experts said that the opinion shows that there is not necessarily a constitutional barrier to proceeding further with the Bill, which passed a Dáil vote in January of this year.

“If the Oireachtas believes it is sufficiently important to defend the rights and interests of borrowers in this manner, this advice suggests it could pass this measure and let the courts decide on its constitutionality if challenged,” David Kenny, an assistant professor in the School of Law in Trinity College Dublin, and a lecturer in constitutional law, told The Irish Times.

“It is certainly not obviously or patently unconstitutional, and when important social justice issues or exceptional circumstances are in play, it is important that our legislatures act to do what they see as being in the common good.”

Despite this, the legal opinion also suggests that the Bill, which has already been strongly criticised by the Central Bank and the Department of Finance, would prove problematic in other ways. While it finds that the Bill is not incompatible with any major provision of EU legislation, “it is incompatible with EU Euro zone monetary policy. Furthermore, the Bill has the potential to make it very difficult for our domestic banks to comply with EU capital requirements”.