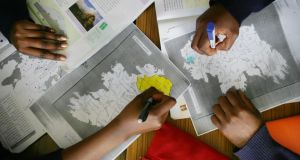 Subsidiary protection is an international form of protection, other than refugee status, that is granted in cases where individuals face a real risk of suffering serious harm in their country of origin. Photograph: Bryan O’Brien/The Irish Times

Three families have been granted leave to challenge the direct provisions system of housing and allowances for asylum seekers.

Some 4,650 people are in the direct provision system, where they are given accommodation, meals and €19.10 per week while they wait for their application for asylum to be heard. They are not allowed to work or claim welfare benefits while in the system, where the average length of time spent is almost four years.

In their root-and-branch challenge, the families argue the scheme was unlawfully established and has no legal basis, as it operates by ministerial circulars and administrative arrangements without any statutory underpinning.

In the High Court this morning, Mr Justice Colm Mac Eochaidh granted them leave to challenge the system and instructed that the case return to court on November 4th.

The families contend that there is no statutory basis for the payment of the €19.10 weekly allowance for adults and €9.60 for children, or for the setting of those amounts. They argue that direct provision, by excluding them from receiving basic social welfare payments, violates rights to private and family life under the Constitution and the European Convention on Human Rights.

According to papers submitted to the court, the families also argue that key aspects of the system are in breach of the principle of the separation of powers and invalid given article 15.2.1 of the Constitution. This article provides that the “sole and exclusive” power of making laws is vested in the Oireachtas.

“The operation of the scheme is unconstitutional due to the lack of any originating legislative basis and the absence of parliamentary scrutiny or modalities for review by the Oireachtas,” one of the families argue. They say similar schemes for other categories of people in the State “are required to be, and are, placed on a statutory footing.”

Established in 2000, direct provision has been widely criticised by campaigners for providing cramped and in some cases sub-standard accommodation. Of the 34 centres that provide accommodation - which include former hotels, hostels, a caravan park and a leisure centre - seven are owned by the State and the rest are run by private operators.

In all, it is estimated the State has spent at least €775 million on the direct provision system since it was established.

1 Coronavirus: No swift return to ‘normal state of affairs’, warns expert
2 Growing hope in Government of partial easing of restrictions after May bank holiday
3 Coronavirus: Ireland will have to ‘live alongside the virus’
4 Chief medical officer urges people not to visit hardware stores
5 Coronavirus: Government to extend restrictions for at least two weeks
Real news has value SUBSCRIBE