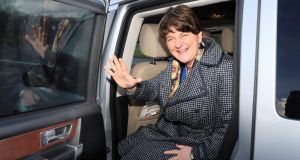 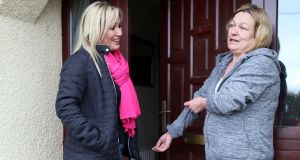 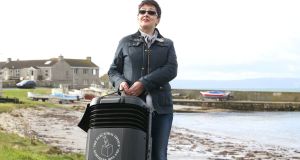 Senior presiding officer and polling station manager Teresa McCurdy arrives on Rathlin Island, off the north east coast of Northern Ireland, with the ballot box in which the island’s population of about 100 will cast their votes during Thursday’s Assembly election. Photograph: Brian Lawless/PA Wire

Hundreds of thousands of people go to the polls in Northern Ireland on Thursday uncertain whether they are voting for a resumption of the Northern Executive and Assembly or a return to British direct rule.

A total of 1,254,709 people are registered to vote to elect the next Northern Assembly, which will be reduced in size from 108 to 90 members. Based on recent elections, the expectation is that there will be a turnout of between 55 per cent and 65 per cent. Polling began at 7am and continues until 10pm.

Parties such as Sinn Féin, the SDLP, the Ulster Unionists and Alliance are hoping that public anger over the botched Renewable Heat Incentive (RHI) scheme, which could result in an overspend of up to £490 million (€570 million), will galvanise voters to turn out in high numbers to vote for them.

The DUP and its leader, Arlene Foster, are banking on their warnings about a “radical republican agenda” driven by Gerry Adams and about Sinn Féin being the largest party after the election will prompt unionists to maintain faith with them.

All parties agree that after the 18 counts are completed this weekend, a period of hard negotiations must follow before there can be any chance of restoring Stormont.

There is also concern that such is the antagonism between the DUP and Sinn Féin, which are expected to be returned as the two leading parties, that it will be difficult to strike an agreement, meaning Northern Ireland could be in for a prolonged period of direct rule from Westminster.

The great imponderable of this election is how deep the public disaffection is with the DUP over the RHI scheme, and whether parties will lose or gain seats as a result.

In the previous 108-seat election, with 18 six-seater constituencies, the DUP won 38 seats, Sinn Féin 28, the UUP 16, the SDLP 12, Alliance eight, and the smaller groupings six.

Based on the same voting pattern proportionally, this time the DUP would be expected to take 32 seats, Sinn Féin 23, the UUP 13, the SDLP 10 and Alliance seven, with the smaller groups dropping one of their six seats.

Sinn Féin in particular believes that nationalist anger over RHI and annoyance at a perceived DUP slighting of the Irish language, power-sharing and nationalism in general have energised its vote base.

Ms Foster also has regularly warned during the campaign that such is the predicted closeness of the vote that Sinn Féin might emerge as the largest party and be entitled to the first minister post.

Plague on both houses

The SDLP and UUP, and Alliance as well, have argued for a plague on both the DUP and Sinn Féin houses and urged voters to support centrist parties “who can work together”.

On the eve of polling, the former DUP first minister Peter Robinson broke his silence to accuse the “more belligerent elements in Sinn Féin” of precipitating an unnecessary election.He argued that, notwithstanding the RHI debacle, the election was avoidable, and warned that the devolved powersharing institutions at Stormont were now under serious threat.

“I cannot help feeling, no matter what now will be said, that had Martin McGuinness been in good health a breakdown would have been avoided,” he said. “As it is, the more belligerent elements in Sinn Féin have seized their opportunity and are seeking to advance their agenda regardless of imperilling the political structures.

“The structures, however imperfect, are all that stand between Northern Ireland and political isolation and impotence. While the election is unstoppable, the headlong rush into destruction is not.

“Parties need to take care that the positions they are adopting do not close off sensible options. They should step back, take a breath and ensure there is sufficient space for an agreement to be reached in the calmer times that follow the hustings.”