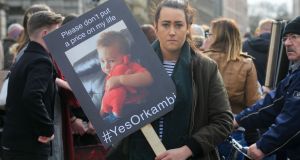 Shauna McCormack with a placard featuring her two-year-old son Leon, who has cystic fibrosis, at a protest outside Leinster House, Dublin. Photograph: Gareth Chaney/Collins

Hundreds of cystic fibrosis (CF) patients demonstrated outside the Dáil on Wednesday in support of free access for CF sufferers to a groundbreaking new drug, despite a last-minute appeal by Minister for Health Simon Harris to call off the protest.

Mr Watt said the Minister had offered to provide “certain assurances” if they agreed to call off the protest.

However, Mr Harris’s written assurances were judged by CF campaigners to be too vague and the protest went ahead.

The demonstrators want the HSE to approve Orkambi, which greatly improves lung function and reduces hospitalisations among sufferers.

Mr Watt said he was unclear why the Minister had asked for the cancellation of the event.

It is understood Mr Harris believed the protest would strengthen the hand of the drug’s manufacturer, Vertex Pharmaceuticals, in price negotiations.

After Monday’s meeting, the Minister provided The Irish Times with a statement which said the process of reaching an agreement with Vertex was now entering “a critical phase” and appealed for “space” to allow a deal be concluded.

However, it has also emerged that there has been no contact between HSE negotiators and Vertex since late January.

This was confirmed by a spokeswoman for the company, who said Vertex submitted its latest price proposal for the drug in mid-January and answered all outstanding questions by the end of that month.

“Since then, we have not heard back from the HSE.”

A spokeswoman for Mr Harris said Department of Health and HSE officials had spent the time since Vertex’s last submission “getting their ducks in a row” and working on “commercial and contractual stuff”.

It was “neither here nor there” when they last met Vertex, she said.

At the demonstration, speakers expressed frustration at the nine-month wait for an outcome from the price talks.

Keith McCabe, from Greystones, Co Wicklow, whose three-year-old son Senan has CF, said patients were tired of being used as “political pawns, or items on a balance sheet”.

Fianna Fáil TD Marc MacSharry accused Mr Harris of “waffle”, while party leader Micheál Martin said the State should be in the “vanguard” of approving new drugs, instead of following other countries.

The proposal made by Vertex provides for the approval of a number of CF treatments.

In addition to Orkambi, the company has proposed the approval of an existing drug, Kalydeco, for 2-5-year-olds, as well as a third treatment for CF patients that is in the pipeline.

The deal would last for 10 years and would apply to about 600 Irish patients with the disease.

Vertex initially sought €159,000 per patient for Orkambi. The HSE estimated the cost to the exchequer of approving this proposal would have been almost €400 million over five years.

It is believed the price now sought by the company has dropped to about €100,000 per patient.