Aran Islands air service may be based at Shannon Airport 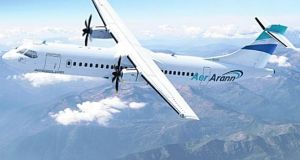 Uncertainty over the island service dates back more than three years.

Shannon Airport may be used as a link base with the Aran Islands if efforts to resolve difficulties with the contract held by Aer Arann Islands fail.

However, the Department of the Gaeltacht and Islands has offered to discuss a possible purchase of the Connemara airstrip owned by Independent Senator Pádraig Ó Céidigh which serves the three islands.

Incoming Minister for Gaeltacht and Islands Seán Kyne said the department “will be talking” to Shannon Airport authorities about flying in there after December 6th if no agreement is reached with the present carrier.

He said the department is also “progressing” arrangement of a short-term contract competition. This is to ensure the service continues and it is also looking at possible acquisition of a site to build its own airstrip in the long term if there is no agreement.

Purchase by the State of the airline and airstrip could provide a guaranteed future for the 40-year-old island air service, said Senator Ó Céidigh at the weekend.

He announced during the summer that he could no longer continue to run the service after December 6th this year, due to restrictions on the contract which came into place in 2017 and was due to run till 2020.

Protective notice has already been given to the 40 staff at Indreabhán and on the islands. The three island airstrips are owned by the State.

Senator Ó Céidigh said he could not discuss contract difficulties, but that he had suggested some years ago the State buy the service and Connemara airstrip. Mr Ó Céidigh acquired the airline with partner Eugene O’Kelly in 1994.

“I contacted officials again this time last year about it and they said they weren’t interested. But I think we can discuss the issue now and I have set no preconditions,” he said.

It is understood that the department has said it will discuss the issue. But on condition Mr Ó Céidigh’s company withdraws its notice to quit the public service obligation (PSO) contract in December and withdraw the airport lease.

The 2017-2020 contract covers about 3,500 annual flights between the three Aran Islands and the Connemara airport at Indreabhán. The service has carried 42,000 people annually at peak, but this figure has fallen to just over 30,000 under the latest PSO terms.

The uncertainty over the island service dates back more than three years, when then minister for the Gaeltacht and Islands Joe McHugh had to abandon a tender for a fresh contract which named a helicopter company as preferred bidder.That firm offered to fly from Carnmore airport, on the east side of Galway city.

However, islanders were deeply unhappy about this proposal. They pointed out that Galway Airport at Carnmore was 52km from the ferry port at Ros-a-Mhíl, which provides an alternative when conditions are not suitable for flights. The airport at Indreabhán is just 8km away in south Connemara.

Aer Arann Islands was then selected as the preferred tender under a new contract advertised in April 2016, which stated that Indreabhán must be used. It came into force in 2017.