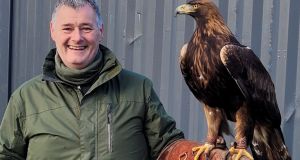 John Nugent with his Golden Eagle Kalin, who is missing in Co Wicklow. Photograph: John Nugent

The owner of a golden eagle lost in Co Wicklow has appealed for the public’s help finding the bird, which is unlikely to be able to survive in the wild.

The eagle had been bred in captivity in Austria, and previously had been a display bird.

Mr Nugent has had the bird since last November and had been training him to fly and return home. Last Wednesday Kalin managed to untie his leash and fly off, and has not been seen by his owner since.

Mr Nugent owns two eagles, Kalin, and an American Bald eagle. When he is training either of the birds to fly they wear a GPS location tracker.

However, Kalin had not been wearing the tracker when he flew off as he was resting, Mr Nugent said.

“He’s never been out in the wild, he eats chicken legs from the supermarket … My biggest fear to be honest is someone shoots him,” he said.

It was likely the golden eagle was still within 5km of his home in Co Wicklow, his owner said. “This bird is not fit, I had him flying 50, 100 feet at a time,” he said.

He had been spending several hours each day training the eagle, and had hoped to have him “flying free” off the leash and then able to return home by St Patrick’s Day later this month, he said.

“I haven’t slept in five days worrying about him, I think he’s looking for me as much as I’m looking for him,” he said.

Kalin was a gentle bird, and would likely not be scared by humans or dogs. “The minute you came into the aviary he would be jumping up, looking to jump onto your arm. He sees the glove and he’s excited,” he said.

Golden eagles raised in the wild have a life expectancy of 10 to 15 years, but in captivity they could live for more than 20 years, Mr Nugent said. Keeping and training eagles had been a “passion” of his since 2008, Mr Nugent said.