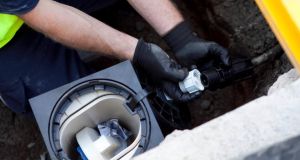 An anti-water charges campaigner has been fined €2,000 and ordered to pay €800 compensation after he was convicted of 10 counts of criminal damages to water meters during a protest last year.

Brian Gould (64), of Barry’s Place, Gurranebraher, Cork, was also bound to the peace and ordered to be of good behaviour after he was convicted of the offences at Cork District Court on Tuesday.

Gould had denied all 10 charges of causing criminal damage to the water meters, the property of Irish Water, at Ashbrook Drive and Ashbrook Grove in Carrigaline, Co Cork, on August 22nd, 2014.

However, Judge Olan Kelleher found Gould guilty of all 10 charges after hearing evidence from five prosecution witnesses and viewing CCTV footage taken by a subcontractor for Irish Water.

Subcontractor Paulus Zalimas told the court he had followed Gould around for 30 minutes and watched him put his hands in the boundary boxes where the meters were being installed. He saw Gould put his hands into the boxes and break the meters by removing the automated meter readers (AMRs) attached to each meter.

Mr Zalimas said they had received instructions from Irish Water not to intervene on safety grounds to try to stop protesters such as Gould from removing the meters so he did not try to stop him.

He said he checked the meters outside the houses after Gould had moved away and he found that 10 of them had been broken and he recovered three of the snapped off AMRs.

Cross-examined by Gould, who represented himself, Mr Zalimas said he saw him bend down and break a meter outside one house twice after the first meter was replaced with a new one.

“I am not allowed stop you breaking the AMR so I did not try to stop you,” said Mr Zalimas, adding that he obeyed his instructions and informed his supervisor who, in turn, notified gardaí.

Gould denied the charges but did not go into evidence himself nor did he call any witnesses to rebut the evidence given by Mr Zalimas and two other civilian witnesses and two Garda witnesses.

In submissions he argued that there was something fundamentally wrong if people were unable to remove water meters which were being installed outside their houses against their will.

Judge Kelleher fined Gould, a semi-retired carpenter and carer, €200 per charge and ordered him to pay €800 compensation for damage to the 10 meters and bound him to the peace for two years.