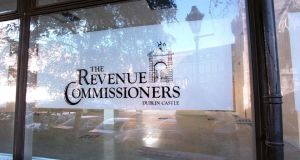 A group of six anti-austerity activists are occupying the Revenue Commissioners’ offices in Dublin’s Cathedral Street, off O’Connell Street.

The occupation began at about 11.15am today when the five men and one woman began a sit-down protest in the Revenue offices as people dealt with their tax affairs - some making their Local Property Tax payments ahead of the deadline.

Gardaí were called to the scene and the offices were closed to the public at about 12.10pm.

A spokesman for the group, Ciarán Carr, told The Irish Times the six were “all independent and not members of a political party”. Their “anti-austerity sit-in” was “on behalf of those who can’t pay the property tax”, he said. “We won’t give up the fight no matter how small,” he said.

The group planned on staying in the building “as long as we can” he said, insisting they were not in the way of anyone conducting their business there.

“We haven’t been asked to leave. There’s a [Garda] sergeant here and he hasn’t asked us to leave. But they are closing the building,” he said.

The group attempted to hold up a “Dublin Says No to Austerity”, banner at an office window, but were restrained by a garda who pulled down the blinds.

Brian Kiernan, a self-described Sinn Féin activist, had been dealing with his tax affairs at the office when the protest began. He said there were “almost 70 people there at the time. We were rushed through.” The protesters “were in no one’s way”, he added.

Shortly afterwards a staff member announced to customers waiting outside that they were “closed for the day” and the shutters were drawn down. At time of writing the protesters were still inside.