Anthony Foley death: ‘Our chieftain was carried away . . . we were not ready’ 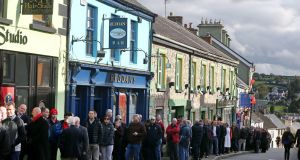 People wait in line to pay respects to the family of Anthony Foley who lay in repose in St. Flannan’s Church, Killaloe in Co Clare on Thursday. Photograph: PA 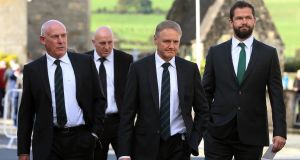 (Left to right) Michael Keaney, Keith Wood, Ireland coach Joe Schmidt and Andy Farrell arrive to pay their respects to the family of Anthony Foley, ahead of his funeral on Friday. Photograph: PA 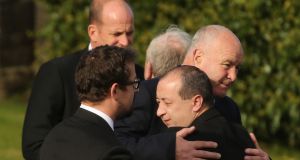 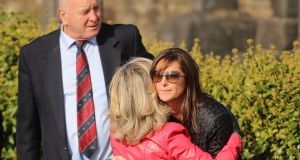 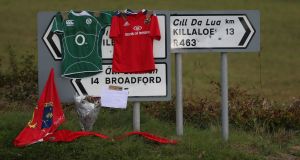 Signs point the way to Killaloe in County Clare where the funeral of Munster head coach Anthony Foley is taking place. Photograph: PA 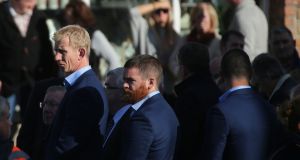 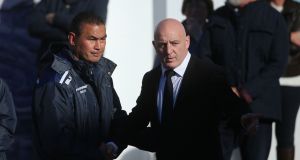 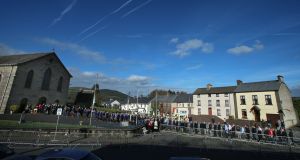 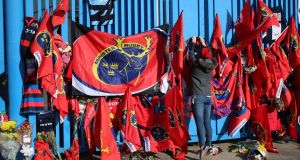 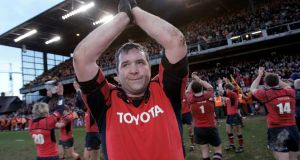 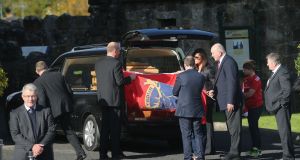 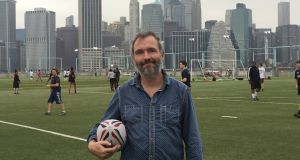 John Breen, author of the play ‘Alone It Stands’

There are some things you take for granted.

Things that are just a good part of everyday life, sometimes you don’t notice them, but they make life worth living.

The sun in your face on an autumn morning. Water when you are thirsty. The sound of a children’s playground in the distance. A walk in the woods. The pillars of life that we all lean on.

Well, one of them is gone.

One of the joys of being Irish is that men like Anthony Foley, Paul O’Connell, Roy Keane and Brian O’Driscoll and women like Katie Taylor, Annalise Murphy and Sonia O’Sullivan are beacons of decency and toil.

Constant in their efforts to achieve for themselves, their families, their teams and for us.

The pride we feel in their achievements is not trivial, it lifts us. Munster’s match against the All Blacks in 2008 lifted the city of Limerick at a time of darkness following the murder of Shane Geoghegan.

I was taking my 11-year-old son to his rugby match on Randall’s Island in New York when I got a text message with the news of Anthony Foley’s passing.

At such times you feel the need to reach out into your community for solace. I spoke with some of the other parents on the sidelines about it but they didn’t really understand what it meant. Sure, how could they? I felt very far from home.

“But most importantly of all, remember this; it’s only a game,” is a line I wrote at the end of a speech in Alone It Stands where Tom Kiernan has exhorted his players to lay their bodies on the line to beat the All Blacks. 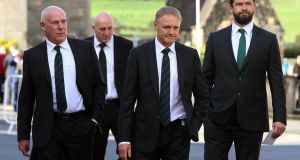 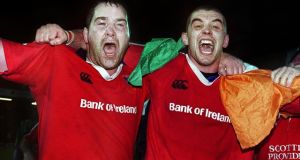 It gets a laugh from the audience but has an ironic poignancy at the end of the play, which tells the story of the defeat of the All Blacks by Munster in Thomond Park in 1978, as Donal Canniffe weeps over the body of his dead father.

As a playwright, language matters to me and I am always perturbed at the hyperbole attributed to sporting defeats.

I think: Don’t use those words. There is no such thing as a sporting catastrophe. When trouble comes you’ll know it.

It is hard to understand or express the sense of confusion, injustice and grief I feel over the death of a man I hardly knew. I can only conclude that Anthony Foley carried something of our collective soul away with him when he died.

His untimely death as a father of young children, as a husband, a brother, a son and as a chieftain, a leader in whom a great multitude had rightly placed their hope and trust, has pierced our collective hearts and all we have left for now are bitter tears and our cherished memories of his great days.

And what days. From his triumphant run with Shannon in the All Ireland League to the lifting of the Heineken cup for Munster to his glory days on the national team, Anthony bore the hopes of his community on his shoulders from when he was a boy to the day he died.

Anthony grew up in the dressing room in Thomond Park. He embodied the notion of bitterness and pride that became Munster’s unofficial motto. He was all courage. He never shrunk from adversity, from responsibility or from destiny.

It isn’t only a game to people who have dedicated their lives to it. And we would do well to remember that if it matters that much to them, it should matter to us.

We can be as uplifted by grace and grit on the field of play as we can be transported by great music. Art and sport are creators of communion. It is at times like this we realise how much we need it and how much we take it for granted.

A few years ago I interviewed Brendan, Rosie and Anthony Foley for a documentary to celebrate the 30th anniversary of the 1978 game. All three were capped for Ireland and played for Munster. Rosie and Anthony gently poked fun at each other and at their father throughout the interview in a way that no other family in Ireland could.

Rosie said their father used to tease them, saying that even though Anthony and Rosie were so accomplished, the only way they could out-do Brendan’s achievements was to have children that achieved more than they did.

What a family! The sporting ambition and exhilaration surging down through the generations.

Brendan wears his greatness lightly and so did Anthony.

Anthony had his father’s eyes. Brendan’s eyes sparkle with a joy in life. He passed that sparkle and joy on to his children. It is heartbreaking now to think of that sparkle dimmed by grief and death.

We are all dimmed by Anthony Foley’s passing. His intelligence his leadership, his humility and his humour gone too soon. When the story of the glory of Munster is written, it will forever have this sad footnote.

Our chieftain was carried away from us in the night. We were not ready.

John Breen is the author of the play ‘Alone It Stands’ which tells the story of the defeat of the All Blacks by Munster at a match in Thomond Park in 1978.