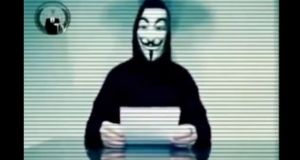 ‘Anonymous have been watching. Your government is lying to you. It is not against the Irish law to refuse signing with Irish Water.’ Image: YouTube screengrab

A video purporting to be by online hacking collective Anonymous has accused the Government of stealing and using threats in order to force the introduction of water charges.

The Government is accused by a masked individual in the video of stealing and using “extreme threats” including fines and cutting off water supply to force the payment of water bills come January.

“As of the 1st of October 2014 the Irish government has embarked on an accelerated water metering programme to have them installed in 80 per cent of homes by 2016.

“It is with great sadness and frustration to know that your crooked government is attempting to steal from you once again by charging you for the service of water being brought to your homes.

The government and Irish Water have been using extreme threats to force you to pay your water bills come January out of fear of billing fines and the cut-off of water supply to your household.”

“Anonymous have been watching. Your government is lying to you. It is not against the Irish law to refuse signing with Irish Water.

“You are under no legal obligation to enter into a treaty with any private company against your will. It would run contrary to the constitution, Irish consumer law and European law and would therefore be completely unenforceable as no records containing such law are in existence.

“Your meter is not your contract. You will not be made to sign anything. You, as a human, have the right to stand for a natural human resource. You should not be stripped of money to pay for water filled with neurotoxins.

“The Republic of Ireland must rise as a nation and keep holding the fight for their access to free healthy water. The government are gaining fear as the power are in the hands of the public. Grab it and own it.

While the video was purportedly posted by Anonymous its origin is unclear. It was posted from a YouTube account in the name of ‘Guy Fawkes’ that has posted numerous videos relating to the anti-water charge campaign in recent months. The YouTube account is linked back to a Twitter account with the handle ‘@fingalols’ which has also tweeted extensively about the anti-water charges campaign.

1 Hotel restaurants, golf and tennis all in line for reopening but Government to warn ‘every contact counts’
2 Exiting Level 5: What will reopen, when will it happen and when will we know?
3 Forget Black Friday, welcome to Green Friday - 21 Irish retailers with great deals
4 Businesses can show ‘Dunkirk spirit’ by taking new direct ferry to France
5 Coronavirus search: How is Covid-19 spreading in your locality?
Real news has value SUBSCRIBE