Annalise Murphy to be grand marshal of Dublin parade 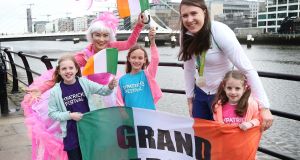 Olympic sailing silver medallist Annalise Murphy is to be the grand marshal of the Dublin St Patrick’s day parade in recognition of her achievement at the Rio Olympics.

Ms Murphy describer her selection to lead the parade as “such a huge honour. I thought at first ‘are you sure? Do you mean me, not someone else?’”

Speaking as details of the St Patrick’s Festival 2017 were announced, she said “I’m really looking forward to it. It’s actually going to be really nice. I’ve spent so many Patrick’s days away or competing or training, so it’s going to be brilliant just to be at home in Dublin.”

CEO of St Patrick’s Festival Susan Kirby said “we feel she very much personifies the best of Ireland on a global stage and she certainly flew the flag for us all in Rio. It’s certainly an opportunity for us all on a great day of Irish celebration that we’ll get the opportunity to thank her and recognise her achievements.”

Ms Kirby added that it was also an opportunity for other young people in Ireland “to be inspired by her achievements and what can be achieved with her humility and hard work”.

Asked if she would be wearing her Olympic medal for the parade Ms Murphy laughed and said “it’s really heavy, to wear it for that long around your neck”.

Asked what she had been doing since the Olympics she said “I took a little bit of time off training. I’m back training now and doing a cookery course. I’m nearly finished.”

Her first competition event will be in the Netherlands in May. She is training with a group of “youth girls who are all really talented. They’re moving into senior now and they’re going to want to try and beat me for my place (on the Olympic team) and that makes it more exciting.”

The four-day St Patrick’s festival which runs from March 16th to 19th will cost €1.9 million and includes more than 40 events including the large-scale parade, the ‘big day out’, the ceili and treasure hunt.

“There is a very rich cultural programme with gigs, concerts in St Patrick’s cathedral and a day of debate and consideration in Smock Alley theatre on Saturday called the Revolution will not be televised,” Ms Kirby added.

The festival is including events that “try to expose the cultural infrastructure of Dublin and Ireland” involving the National Gallery and National Library.

This year’s Dublin festival is expanding to include Fingal with an open air cinema in Swords Castle, and at Blanchardstown. And there are mystery train trips including one to a destination on the bay and a second to the west of Ireland to mark the festival as a national celebration.