Analysis: Irish peacekeepers’ position at Golan in line of fire 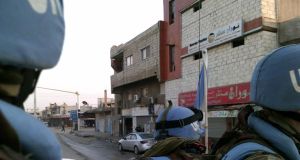 Irish UN personnel on patrol in the Golan Heights in 2013.

In a dramatic rescue, Irish troops of the 44th Infantry Group extracted 35 Fillipino troops from their beleaguered base at Breiqa.

The Irish act as the UN’s Force Mobile Company, or emergency response unit, along the Zone of Separation between Israel and Syria on the Golan Heights.

The Filipino UN position at Breiqa, along with another at Rwihana, were surrounded by Islamist insurgents – including members of the Al Qaeda affiliated Jabhat al-Nusra – after the rebels seized a Syrian border crossing at Quneitra.

The insurgents killed about 20 Syrian troops in that action and abducted, at gunpoint, a further 44 Fijian troops from their UN position in the same rebel offensive.

During gun battles, the Filipino troops at Rwihana managed to escape their position on foot under cover of darkness. At this point, the force commander ordered Irish troops to mount an armoured operation to rescue the remaining Filipino platoon at Breiqa. Army sources said Irish troops engaged in a number of sustained fire-fights with Islamist rebels during this operation. This was later confirmed by Minister Simon Coveney.

Seventy two hours later, the insurgents still hold the Quneitra border crossing and are consolidating their positions. Meanwhile, the UN is frantically negotiating for the release of the Fijian troops – who are missing.

The Irish Force Mobile Company was first deployed to the Golan Heights last September. This followed the withdrawal of Austrian troops due to the deteriorating operational scenario there involving clashes between Syrian pro-Assad forces and a growing insurgency.

In November, the Irish contingent was in a fire-fight with armed anti-regime elements near Ruihinah village. One Irish soldier suffered a soft tissue injury during this. An Irish armoured personnel carrier was also damaged. Since then, the operational environment on the Golan Heights has continued to deteriorate. Anti-regime elements fired on Israel in June killing an Israeli teenager.

As Islamist rebels step-up attacks on the UN and intensify their military campaign within what they term the “southern front” on Syria’s Golan Heights, the risks to Irish troops are escalating.

This raises serious questions about the ongoing viability of the UN mission in the area. The original Undof (United Nations Disengagement Observation Force) was created 40 years ago. The original UN Security Council Resolution 350 mandates an international force to monitor a zone of separation between Israel and Syria. The original mandate did not envisage a vicious civil war in Syria and does not cater for the reality of today’s de facto armed conflict in the area of operations. In short, regional events have overtaken the mission’s design and rationale.

Questions arise as to whether the original UN Security Council resolution mandates UN troops to engage anti-regime elements in combat. Nor did the original resolution envisage the brutal ethno-sectarian nature of this conflict.

The UN, along with Human Rights Watch and Amnesty International, have accused all parties in the Syrian civil war of grave breaches of international law and war crimes.

Fighting on the Golan Heights will inevitably deteriorate and will probably involve the Israeli military as they counter attacks on their territory from militant Islamist groups.

All stakeholders in this rapidly evolving conflict – Assad’s Syrian forces, the Israeli military and Islamist resistance groups – have a track record in killing Irish peacekeepers. Fifty per cent of our casualties in Lebanon were inflicted by the Israelis and their proxies. The remainder of our casualties there were inflicted by Islamic resistance groups such as Hizbullah and Palestinian militias. Syrian troops shot dead an Irish army officer, Comdt Thomas Wickham, on Golan in 1967.

In deciding whether or not to extend the deployment of Irish troops to this volatile situation – or indeed to rotate more troops into the area in September – the Irish Government needs to consider this risk.

Tom Clonan is a security analyst