An Post advises customers not to send mail due to strike 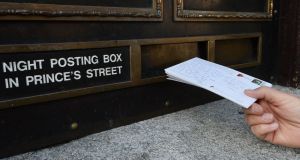 .Post boxes at the GPO were closed as members of the public tried to post letters.Photograph: Cyril Byrne / The Irish Times

Minister for Communications Alex White has urged parties involved in an industrial dispute, that has seen postal services across the State ground to halt , to find a resolution.

Strike action by staff who maintain sorting equipment at An Post centres in Dublin, Cork, Portlaoise and Athlone prompted the company to advise customers not to post any mail with immediate effect. Post boxes at the GPO were closed as members of the public tried to send letters on Friday.

The staff concerned are employed by contractor IO Systems. The dispute centres on a row over new rostering arrangements for the staff and subsequent loss of earnings.

An Post said as a result of the industrial action at IO Systems, there would be no mail collections from businesses on Friday.

“Due to the withdrawal of labour by staff of IO Systems, we are unable to process mail for delivery to customers.”

The Department of Social Protection said contingency arrangements would be in place to ensure the delivery of payment cheques to its customers should the dispute continue into next week.

The Communications Workers Union (CWU), which represents staff at IO Systems, described the decision by An Post to close mail services as “ bizarre and reckless”.

CWU general secretary Steve Fitzpatrick said the move would “have long term damaging consequences for postal services in Ireland and industrial relations at the company”.

Mr White said he had been briefed about the dispute and urge the parties to “focus on finding a resolution that quickly ends the disruption to postal services, using the State’s industrial resolution mechanisms as appropriate.”

He said those involved in the dispute should be “extremely mindful of the impact” it could have on the financial position and reputation of An Post.

The row came at “a time when significant and challenging changes are underway in the postal and communications sector,” he said.

“Above all, I think the needs of millions of citizens and businesses, who rely on our postal service, should be the priority.”

The CWU called for the appointment of a special investigator from the office of the State financial watchdog, the Comptroller and Auditor General, to examine the background and process for the awarding of the IO Systems contract by An Post.

IO systems is a Japanese-owned company based in Athlone which has a three-year deal with An Post. As part of the deal it has to generate savings of about €100,000. As part of reform plans the company introduced new rostering arrangements for staff without agreement of the union.

Last February the Labour Court backed restrucuring proposals with some amendments but the union said it had opposed the manner in which these have been put in place by the company.

The CWU maintained that the new rostering arrangements introduced by the company and reductions in premium and shift payments effectively imposed pay cuts of up to 22 per cent on IO Systems workers. It also maintained that the comnpany had sought to introduce rosters “which will force workers onto non-rotating night work for the rest of their working lives”.

In a statement IO Systems said it “deplores” the action of the CWU which it said was in total breach of an obligation in an agreement with the company to refer any unresolved disputes to the Labour Court for a binding ruling.

The company said that IO Systems staff, instructed by the CWU, were now in default of their conditions of employment to their newly assigned shift requirements as determined by the Labour Court.

IO Systems said that over the past two and a half years it had sought to reach an agreement with the CWU.

“IO systems calls on CWU to abide by its agreement and refer this unresolved and pointless dispute for binding decision in accordance with the terms of the company/union agreement.”

An Post said the mail deliveries on Friday were operating as normal but that a small number of letters had not been processed last night due to the industrial action between IO Systems and the CWU.

“An Post greatly regrets this inconvenience to our customers and urges the parties involved to resolve their differences through the normal industrial relations procedures. “