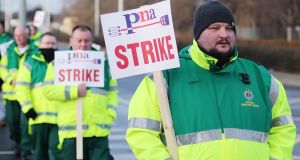 Some of the ambulance staff from the Psychiatric Nurses Association picketing outside an ambulance station on Dublin’s Davitt Road in a dispute over union recognition. Photograph: Niall Carson/PA Wire 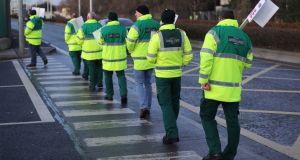 Some of the ambulance staff from the Psychiatric Nurses Association picketing outside an ambulance station on Dublin’s Davitt Road in a dispute over union recognition. Photograph: Niall Carson/PA Wire

Health service management has warned ambulance staff that they would be breaching the current public service agreement and face potential “consequences” as a result of going on strike.

Up to 500 members of the National Ambulance Service Representative Association (Nasra), which is a branch of the Psychiatric Nurses Association (PNA) staged a 10-hour work stoppage on Tuesday in a dispute over trade union representation rights and the deduction of union subscriptions at source.

The PNA said it would consider further strikes including stoppages over consecutive days if the row was not resolved.

Highly placed health service sources said lawyers for the HSE had warned the PNA in a letter that members would be in breach of the current public service agreement by going on strike and this would have “consequences”.

It is understood this is a reference to potential financial penalties that could be imposed on members of unions considered to be outside the public service accord. These penalties include losing out on pay rises, increments and additional benefits for recent entrants .

The PNA on Tuesday confirmed it had received such a warning from the HSE. However, the union strongly rejected that its members were in breach of the public service agreement. A spokesman said the issues at the heart of the current dispute were quite separate to those covered by the public service accord.

It is understood health service management will consider its next steps on the issue in the days ahead.

The executive of the PNA is scheduled to meet on Friday and an escalation of the industrial action is likely to be considered.

The HSE said after the strike ended on Tuesday that despite a “challenging environment” all calls had been responded to and there had been no patient concerns raised.

The HSE said it had received over 600 calls for ambulances on Tuesday and 12 of these had been dealt with by Army personnel who had been deployed by the Government to provide support to the health service during the strike.

The HSE also assigned managers who were qualified as paramedics to work in frontline services.

Members of the trade union Siptu in the ambulance service were not involved in the dispute.

The PNA argued that the HSE refused to recognise it as a representative body for members in the National Ambulance Service.

It said the National Ambulance Service recognised Siptu, Unite and Fórsa as representatives of staff. It said that in particular Siptu was the recognised trade union for frontline staff.

Meanwhile, in the Dáil, Opposition TDs voiced their anger after the Taoiseach insisted an employer is not obliged to recognise a particular trade union.

Mr Varadkar faced questions from Opposition TDs about the dispute.

But he said, “any worker is free to join a trade union if they so wish. But it is not a requirement that any employer either public or private has to collect union dues on behalf of that union.

“Nor is it a requirement that they necessarily recognise that union.”

People Before Profit TD Bríd Smith said the Constitution allowed for the freedom of association and the right to join a trade union of choice.

Solidarity TD Ruth Coppinger said it was not about “what the boss wants” but about the rights of workers and she called on the Taoiseach to instruct the HSE to deal with the union.

Mr Varadkar stressed however that “the HSE recognises three unions already that represent paramedics and ambulance staff. They are all unions affiliated to Ictu. The Government engages with the union movement through Ictu.”

Sinn Féin TD Pat Buckley warned of more strikes if the HSE failed to recognise the union. “The knock-on effect of this will be absolutely atrocious.”