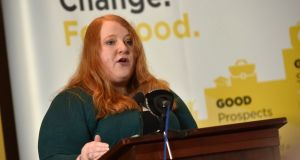 Alliance leader Naomi Long has indicated she would bring her party back into the next Northern Executive – but only on the basis of commitments that would see changes to how Stormont operates.

Ms Long at her party’s manifesto launch on Tuesday said the Northern Assembly election on March 2nd offered an opportunity “to end the Green and Orange politics for good”.

Ms Long said these preconditions remained in place. Alliance wanted restrictions on the use of petitions of concerns (an effective veto the DUP had in the last Assembly because of its strength of numbers), a greater commitment to integrated education, dealing with the past, investing in skills and universities, and an audit on the cost of division in Northern Ireland.

Alliance is hoping to hold the eight seats it won in the last election, notwithstanding that the Assembly is reduced in size from 108 to 90 seats, and possibly to increase its representation.

If it won eight, nine or 10 seats, it could be entitled to a ministry by right but if it fell short it could again be offered the justice department.

Ms Long, like Arlene Foster at the DUP manifesto launch on Monday, said she was suffering from flu but that, unlike the DUP leader, she would take questions.

Asked about the prospects of Alliance re-entering the Executive, she said that “at the very least” the petition of concern should be used to protect minority interests, particularly on social issues, rather than being used by the larger parties to block motions.

Ms Long said Alliance’s five preconditions remained in place but that Alliance did want to be back in the Executive.

“We are willing to go into any Executive and work. We have not been drawing lines and saying, ‘We will not work with this party or that party’. It is not about people and personalities and parties; it is about policy and practice and being able to deliver for the people of Northern Ireland,” she said.

Ms Long said the current stances of the DUP and Sinn Féin indicated negotiations to get Stormont back up and running after the election would be “incredibly difficult”.

Ms Long also called for an independent assessment of the costs of paying for division in society in terms of education and public services. She assessed the cost at about £800 million (€945 million) annually which she contrasted with the estimated overspend on RHI of more than £400 million over 20 years.

“RHI is a scandal. £20 million a year [in overspend] is not to be sniffed at but £800 million a year on the cost of division, on the costs of servicing a segregated society is a real scandal which any Executive post this election needs to able to challenge,” she said.

Ms Long said politicians should focus on issues of real concern rather than constitutional matters such as a Border poll or the strength of the North’s union with Britain. “Let’s be very clear. This election is not about Orange and Green. It is not a poll on the Border. The Border will not shift an inch either way and I can assure you that whoever comes out the largest party it will not be worldwide news . . . because there are much bigger things happening in the world than are happening here in Northern Ireland.”

Ms Long said an “excellent” result for Alliance would be to hold its eight seats but that its ambition was bigger than that and that it hoped to gain seats as well.

– An audit on the cost of division in Northern Ireland.

– Restricting use of petitions of concern in Northern Assembly.

– Step-change in support for integrated education.

– Greater investment in skills and universities.

– Addressing the legacy of past in an urgent and speedy fashion.