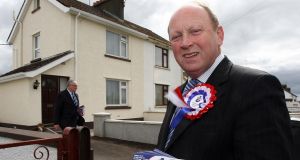 Jim Allister, the leader of the Traditional Unionist Voice. He has been effective in forensically exposing the flaws at the heart of the Renewable Heat Incentive scheme

Jim Allister, the leader of the Traditional Unionist Voice party, the dissident wing of unionism, has a catchy campaign slogan wherever he got it from.

It’s “drain the swamp”, which is what he wants to do to Stormont. He has the same views of the Northern Executive and Assembly as President Donald Trump has about Washington.

He is sure it is an “irredeemable mess”, and that “scandal, squander and downright bad government” are its heavily stamped-on hallmarks.

A QC and former DUP MEP and close ally of the late Ian Paisley, he abandoned the Democratic Unionists in disgust when in 2007 it decided to share power, as Allister persistently would have it, with “Sinn Féin/IRA”.

If Stormont never returns he will be content, and if somehow the DUP and Sinn Féin, which are likely to be the two biggest parties after voting on March 2nd, are back running the Executive and Assembly sometime this year then he will continue to be a very sharp thorn in their sides.

With his courtroom skills Allister has been particularly effective in forensically exposing the flaws at the heart of the Renewable Heat Incentive (RHI) scheme – it could cost the Northern taxpayer £490 million – and laying most of those defects at the door of Arlene Foster and the DUP.

In the previous Assembly he also irritated Sinn Féin by introducing “Ann’s Law” which bans people convicted of serious paramilitary crime from being Stormont special advisers.

He would dearly love to be even more of a nuisance by seeing his running mate in North Antrim, Timothy Gaston, elected with him.

The hope of the three outgoing DUP MLAs – Paul Frew, Mervyn Storey and Philip Logan – is that North Antrim unionists will be more concerned with Orange versus Green matters, and keeping the DUP ahead of Sinn Féin, than the “cash for ash” calamity.

Robin Swann, the outgoing Ulster Unionist Party MLA, must be hoping that RHI is uppermost in the minds of voters in this predominantly unionist constituency which takes in towns such as Ballymena, Ballymoney and Ballycastle.

He was chairman of the Assembly public accounts committee which, before a public inquiry was ordered last month, was charged with investigating the whole RHI scandal. Swann’s wish is that continuing unionist anger over “cash for ash”, together with public support for his and the UUP’s efforts to uncover what went wrong, will bring him back to Stormont.

Sinn Féin appears best placed to take the single nationalist seat that is available in North Antrim. Last May the party’s then outgoing MLA Daithí McKay took 5,297 votes to the 3,093 won by SDLP candidate Connor Duncan, who again is standing.

Yet this time there is an interesting complication. Last August McKay had to stand down as an MLA for allegedly coaching loyalist blogger and flags protester Jamie Bryson on how to give evidence to the Assembly finance committee which McKay chaired.

Seventeen other Sinn Féin members also resigned with her in North Antrim, claiming that McKay has been “hung out to dry” by the leadership. This gives Duncan some small hope that a splitting of the Sinn Féin vote could allow him to come through the middle.

Allister entertains real hope that unionist anger over RHI will see the DUP badly damaged in this most Democratic Unionist of constituencies. The DUP, in an attempt to consolidate, is running just its three outgoing candidates rather than four as it did last time when North Antrim was a six-seater.

The UUP’s Swann could also gain from disaffection over RHI but he is standing on just over half a quota from last May’s election, which makes him vulnerable. Digney may eat into some of McGuigan’s vote, although lost votes may return through transfers.

The last seat could be a battle between the DUP and the UUP. It could end up DUP 3; TUV 1, Sinn Féin 1.