Organisers ‘deeply saddened’ that occasion shelved as a consequence of demonstration 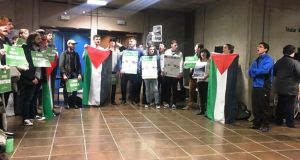 An event at Trinity College Dublin involving the Israeli ambassador Ze’ev Boker has been cancelled following a protest.

Mr Boker was due to speak at a talk organised by the Society for International Affairs (Sofia).

The event was disrupted by a group of about 40 protesters from Students for Justice in Palestine (TCD) who demonstrated and chanted slogans outside the arts block venue where the event was due to take place.

They chanted “we are all Palestinians, in our thousands, in our millions”.

Sofia chair Grace Conway said she was “deeply saddened” that it had to be cancelled.

She told The University Times: “We feel that it was a misunderstanding of what we were trying to do as a society, which was to provide a platform for discourse and we don’t discriminate against any ambassador, we invite all ambassadors and treat the with respect and decorum as diplomats.

“We don’t discriminate against countries whether or not we support their political beliefs.”

“Sofia are a neutral party and we provide a platform of discussion and don’t support or condone and of the behaviour of the countries which that ambassadors represent.”

Students for Justice in Palestine (TCD) founding member Ciaran O’Rourke said they conducted a peaceful protest outside the venue.

He justified the protest on the basis on that Palestinian civic society groups have been calling for the boycott of Israel since 2004.

“Freedom of expression applies as much to the Palestinian students and academics as it does to figures representing the state of Israel.”

Mr Williams asked why gardaí who were there had not intervened to ensure the event went ahead. He said eyewitnesses reported the protesters blocked the door of the room where the event was supposed to take place.

“Every time this happens we end up getting more supporters for Israel,” he said. “People end up getting so frustrated, they actually start to investigate more. Had they let him speak, they could have asked him difficult questions.”

Mr Williams accused the protesters as being hypocrites for condemning Israel while allowing the Turkish ambassador to come and address the society last week despite the country’s human rights abuses against the Kurdish population.