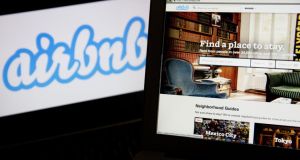 Thousands of Irish people who have rented out rooms in their homes or entire properties using the Airbnb service look set to be hit with a retrospective tax bill dating back to at least the middle of last year. Photograph: Andrew Harrer/Bloomberg via Getty Images. 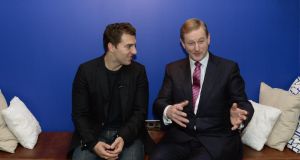 Brian Chesky, co-founder and chief executive of Airbnb, with Taoiseach Enda Kenny at the opening of their new office in Dublin. Photograph: David Sleator/The Irish Times.

Thousands of Irish people who have rented out rooms in their homes or entire properties using the Airbnb service look set to be hit with a retrospective tax bill dating back to at least the middle of last year.

Over the weekend Airbnb began emailing its users in the Republic warning them it was legally obliged “to provide certain information to the Office of the Revenue Commissioners”.

Early this year, Revenue published guidelines on its rent-a-room scheme, which allows people to earn up to €12,000 tax-free a year. In those guidelines it made it clear short-term lets to guests, “including where such accommodation is provided through online accommodation booking sites”, did not fall within the terms of the relief.

As a result of that decision, and because Airbnb now has its international headquarters in the Republic, the company has had to announce a major shift in its policies when it comes to financial disclosures.

Airbnb said it would be supplying Revenue with the names of affected users as well as the address of the properties or rooms listed on its website as well as the actual addresses of those who have registered if they differ from the listed property.

In addition, it will also report amounts paid out from May 1st, 2014 to December 31st, 2014 including cleaning fees. Airbnb will also report the date of users secured their first booking prior to May 1st last year.

For listings that had their first booking during the reportable period, Airbnb will report the check-in date of the property’s first reservation.

Amounts paid out from May 1st, 2014 to December 31st, 2014 are now being reported to Revenue. The amounts will be aggregated by listing for reporting purposes.

“The reporting obligation is driven by the fact that beginning May 1st, 2014, Ireland is Airbnb’s home base for transactions outside the United States. This will be an ongoing part of our annual corporate filing obligation in Ireland,” the company said.

It is to hold a public meeting on Tuesday from 6.30pm at its office in The Watermarque Building in Dublin 2 where there will be a presentation from the Airbnb Ireland team followed by a question and answer session.

People who sign up for the service can make significant sums. The typical price for a double room in Galway city, for example, is about €40 a night while someone with a room to rent in Dublin city centre can charge around €60.

Letting such a property for seven nights a month could generate monthly income of €280 or €420 respectively.

For many people the income from occasional renting of spare rooms will now be taxed at 51 per cent for 2014.

There are thousands of Irish users of the setvice with 540 different properties up for rent for this coming weeked in the Dublin area alone.