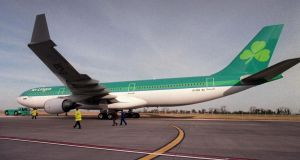 Aer Lingus flight EI-139 left Dublin at 4.23pm on Sunday with 280 passengers but just over two hours into the journey the pilot had to make a U-turn after “a number of cabin crew members” fell ill. Photograph: Alan Betson

Aer Lingus has said two passengers complained of feeling unwell after one of its flights was forced to return to Dublin on Sunday when cabin crew staff fell ill.

Three transatlantic flights were cancelled after the Aer Lingus flight to Boston was forced to turn back.

Aer Lingus flight EI-139 had left Dublin at 4.23pm on Sunday with 280 passengers but just over two hours into the journey the crew had to make a U-turn.

The pilot reported that “a number of cabin crew members” had fallen ill, and it was now understood that seven of the eight flight attendants on board had complained of feeling unwell.

The Airbus A330 landed back in Dublin at 8.40pm and was met by medical personnel. The cabin crew members were assessed and given the all-clear by medics before being allowed home.

Engineering staff inspected the jet in an effort to establish why the flight attendants became ill.

Aer Lingus is continuing its investigation into the incident. One possible cause being considered is whether the crew members were affected by fumes in one of the aircraft’s galley areas.

The cancellation of three flights affected hundreds of passengers, some of whom had to cancel or reschedule their travel plans.

Sunday night’s flight EI-138 from Boston, due in Dublin at 8.05am yesterday, had to be cancelled because no aircraft was available.

The airline then cancelled its Dublin to New York EI-109 service yesterday while the Airbus A330 assigned to that service was seconded and used as an additional flight on the Boston route.

The aircraft at the centre of Sunday’s incident returned to service yesterday and operated as flight EI-139 departing shortly before 5pm.

The second Airbus A330 flew affected passengers on to Boston at 4.30pm, operating as flight EI-2139, while others were accommodated on the EI-135 Shannon to Boston service.

However, as a result of the New York flight being cancelled some customers were forced to rebook flights.

The airline’s New York service from Shannon (EI-111) flew via Dublin to take on some passengers while others, but not all, were accommodated on flights via other European hubs.

Some were due to continue to New York on today’s EI-105 service.

Aer Lingus said that it had no choice but to do this as it was short an aircraft.