Action by journalist Ian Bailey could run to Christmas 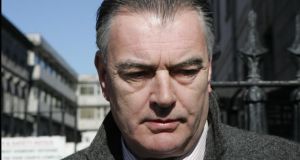 File picture of Ian Bailey who is suing the State for wrongful arrest.

A High Court action for damages by journalist Ian Bailey over his arrest for questioning about the murder of French film producer Sophie Toscan du Plantier, which starts today, could run up until Christmas. It is expected that evidence from up to 80 witnesses will be heard.

Mr Bailey (57), a native of Manchester who has lived in West Cork for the past 23 years, is suing the State for wrongful arrest over the murder of Ms Toscan du Plantier (39) whose badly beaten body was found outside her holiday home in Toormore on December 23rd, 1996.

Mr Bailey was twice arrested for questioning about the killing – on February 10th, 1997 and January 27th, 1998 – but was never charged in relation to the death.

He has denied any involvement in the murder.

In 2007, Mr Bailey, of the Prairie, Liscaha, Schull, Co Cork, initiated a civil action for wrongful arrest and damages against the Garda Commissioner, Minister for Justice, Equality and Law Reform and the Attorney General.