In restructuring of group in 2010, accountant was brought back to Dublin 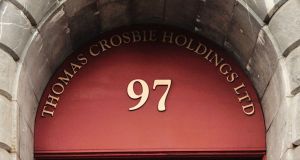 A number of companies within the former Thomas Crosbie Holdings Group were yesterday put forward as the possible employer of a senior executive who is suing for unfair dismissal.

Accountant Kieran Moloney told the Employment Appeals Tribunal he was employed by Post Publications Ltd, publishers of the Sunday Business Post, when it was taken over by Thomas Crosbie Holdings (TCH) in 2002.

Mr Moloney said he was called to Cork by TCH group managing director Anthony Dinan in 2006. He said Mr Dinan had forcefully asked him to become chief executive of the group’s Northern Ireland titles, which included the Newry Democrat and the Down Democrat.

Mr Moloney said he was later given responsibility for the Irish Post in Britain. He said he remained legally resident in the Republic and continued to be paid by Post Publications Ltd.

In a restructuring of the group in 2010, he was brought back to Dublin and given the post of group treasurer at an annual salary of €120,000 a year, some €20,000 less than he had been earning when running the UK titles. He said he continued to be paid by Post Publications Ltd and remained a member of its pension scheme.

Mr Moloney’s senior counsel Patrick O’Reilly said for about 12 years, Post Publications Ltd paid his client’s salary. The company made tax returns listing him as an employee, issued him an annual P60, included him in company private health insurance provisions, and enrolled him in its pension scheme. Letters from the Revenue and consultants Deloitte confirmed Mr Moloney’s status as an employee of Post Publications Ltd, he said.

Tribunal chairman Roderick Maguire said it would consider who employed Mr Moloney and would issue a preliminary finding in due course.