80 years ago: how Éamon de Valera had his old comrades executed 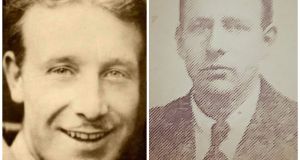 Eighty years ago this week, a barely remembered event in the history of law and order within the Irish state occurred, yet the significance of it cannot be underestimated.

On September 5th 1940, a notice appeared in The Irish Times: ‘Following the rejection of the Supreme Court of the appeal on behalf of Patrick McGrath and Thomas Hart (sic)… the Government has fixed Friday, September 6th for the carrying out of sentences of death imposed by the Military Court… ’

Due to wartime censorship, this statement omitted the fact both men were members of the Irish Republican Army (IRA).

McGrath and Harte became the first two members of the IRA executed since the Civil War of 1922-23, and the first under the Fianna Fáil government headed by Taoiseach Éamon de Valera. Of note, McGrath, like de Valera, was a veteran of the Easter Rising.

At this time, de Valera’s government was determined to uphold the state’s neutrality against the backdrop of an escalating military conflict in Europe. The executions also represented a critical break in Fianna Fáil’s turbulent relationship with the IRA.

During the Civil War, the Cumann na nGaedheal government led by WT Cosgrave had seen over eighty republicans executed who had taken up arms against the new Irish Free State. These executions caused lasting bitterness among republicans, many of whom joined Fianna Fáil, but de Valera’s government’s decision to execute Harte and McGrath demonstrated that he was prepared to do what he had decried done to republicans previously.

On coming to power in 1932, de Valera failed to persuade the IRA leadership to disband and support his government’s peaceful, constitutional dismantling of the Free State’s links with Britain.

Part of de Valera’s outreach included lifting a ban on the organisation which was re-imposed in 1936 following continued IRA activities, and its members imprisoned under coercive legislation.

Yet by 1940, in terms of membership and resources, the IRA was very much a pale shade of the revolutionary paramilitary force that had shaped the events of 1919-23. The IRA’s chief aim remained the overthrow of British rule in Ireland by military force in both jurisdictions on the island, the 26-county Irish Free State - being a member of the British Commonwealth - and the six-county state of Northern Ireland.

The IRA, in this period, was mainly associated with the devoutly militant and charismatic Sean Russell. Russell’s statue in Fairview Park, Dublin, remains one of the most contentious public monuments in Ireland.

In 1938, Russell had been elected to the position of IRA Chief-of-Staff. A noted leader in the republican ranks since 1914, the ambitious Russell was still a divisive figure for some in the IRA.

Ironically, so strong was this internal opposition, the previous year Russell had been dismissed from the IRA’s ranks for defying its Army Council by cultivating a support base within the organisation. It was these supporters that now propelled Russell back to a leadership role, and assisted him in gathering resources for a proposed bombing campaign within the cities of the old enemy, Britain itself.

Russell had managed to coax back several veterans of the earlier 1916-23 period. One of these was McGrath, who became his adjutant-general and the IRA’s director of training.

Before being attracted back to the movement, McGrath had run a drapery business from his home on Aungier Street. He probably never envisaged a return to the IRA after the Civil War, given that he applied for and received a state military pension in the 1920s; anathema to most IRA who refused to recognise the Irish Free State.

His pension application states in February 1920, following an encounter with police detectives near College Green, McGrath, a member of the IRA’s Dublin Brigade, suffered a gunshot wound to the left shoulder. So serious was this wound it had resulted in little to no power in his left arm and hand.

The IRA, led by Russell, and in defiance of the de Valera government, now declared war on Britain in 1939.

Yet, the ambitious bombing campaign in England was to prove a disaster, seeing the death of seven civilians, including five in Coventry just under a week before the outbreak of the Second World War. Between from January 1939 to March 1940, over a hundred republican activists had been sentenced to various terms of penal servitude, and two IRA volunteers executed by the British authorities.

An IRA raid on the weapons store in the Magazine Fort in the Phoenix Park on Christmas Day, 1939, represented one major success in the period, however it resulted in the later seizure of much of the haul.

By mid-1940, the shortcomings of this campaign were evident to many involved, some leading IRA figures directly pleading with Russell to bring it to a halt. The ever-optimistic Russell, meanwhile, departed for Berlin following a fundraising tour of the United States. There, Russell met with leading figures in the Nazi military and intelligence, the culmination of contacts the IRA Army Council had cultivated in recent years.

By all accounts, including from British intelligence, Russell himself held little to no interest in Nazi idealogy. The appeal of seeking German aid from Britain’s enemy was rooted in the old Irish republican maxim, ‘England’s difficulty is Ireland’s opportunity.’ Yet this association with Hitler’s regime was to become the most controversial aspect of Russell’s legacy.

Little came of this venture however, though certain historical details remain murky. Russell, travelling aboard a Nazi U-Boat back to Ireland in August 1940, suddenly took ill due to a burst stomach ulcer, dying shortly after. Russell’s remains, in a pathetic scene, were wrapped in a Nazi flag and buried at sea one hundred miles off the Galway coast.

The introduction by de Valera’s government of the Emergency Powers Act in 1939, which included the death penalty for subversion, was every bit as draconian as legislation introduced by Cosgrave’s cabinet during the Civil War. By 1940, de Valera’s government had already allowed two republican prisoners to die on hunger strikes.

The fates of Paddy McGrath and Tom Harte became intertwined with events at McGrath’s base of operations at a residence on 98a Rathgar Road in south Dublin on the night of August 16th, 1940.

Born in Lurgan, Co Armagh, in May 1916, the twenty-four year-old Tom Harte had been sent by Russell to take part in the bombing campaign in England. Arrested by police there in 1939, Harte was deported back to Dublin. On his return to Ireland, he worked as an organiser for IRA General Headquarters. It was in this capacity he was present with McGrath and others that night.

The raid by Garda Special Branch saw the deaths of detectives Patrick McKeown and Richard Hyland by gunfire. The exact sequences of events remain contested (including the suggestions McKeown and Hyland were killed by ‘friendly fire’ on their side).

Republican lore also indicates that McGrath returned to aid the wounded Harte who had been left behind by the group who initially fled the residence. In the aftermath, both men were arrested.

Before a Special Military Court, both were subsequently found guilty for the deaths of the two Gardaí and sentenced to death by firing squad.

The Lord Mayor of Dublin, Kathleen Clarke directly appealed to the Minister of Justice, Gerald Boland - himself a former IRA member - for a reprieve of both men. Clarke herself was not only a founding member of Fianna Fáil, but was a widow of the executed leader of the 1916 Rising leader, Thomas Clarke.

This, along with her own considerable service to the revolutionary cause, elevated the plight of both men as petitions were organised. The formidable Clarke was representative of a strand of opinion within Fianna Fáil who were deeply uncomfortable with the pending executions.

Following an unsuccessful appeal to the Supreme Court, the men were executed in Mountjoy on September 6th a little over two weeks since the deaths of the two Gardaí. In her memoir, Clarke wrote: “It seemed to me that in executing men like McGrath, the government was carrying out the old British policy of killing or exterminating in one way or another all the best of our people.”

Clarke ordered the national flag at half mast at Dublin City Hall, and closed the blinds of the Mansion House out of respect for the men, both actions drawing the ire of the government. The executions were to encourage Clarke to eventually depart from Fianna Fáil.

By the end of the Second World War, the IRA itself was decimated and demoralised following continued repression by the state security forces, mass internment and four more executions of IRA members. It is telling that no future republican military campaigns by the IRA or its heirs encouraged direct engagement with the security forces of this state.

Both the lack of mass public support for republicans, along with little obvious results of the IRA-German outreach, was to be an important victory for de Valera and his government colleagues. On leaving office in 1948, his party had cemented its credentials as one dedicated to upholding law and order, no more to be bedeviled by associations with former republican comrades from the Civil War.

Today, in the most devoted republican circles, de Valera’s treatment of the IRA in this period remains bitterly resented. The names of Harte and McGrath are listed on plaques at the base of Russell’s statue. It remains the only memorial to the IRA during this turbulent period in its history.

The executions eighty years ago this week were arguably an important moment for de Valera in government, continuing a process that began at Fianna Fáil’s founding in 1926. De Valera for so long was viewed as the greatest opponent to the infant Irish state on its founding.

By demonstrating that not even former comrades were spared the rule of law during a national emergency, de Valera could validly claim he had become the same State’s greatest defender.

Gerard Shannon is a historian who resides in Skerries, Co. Dublin. He is currently developing a biography of the IRA Chief-of-Staff, General Liam Lynch, to see publication by Merrion Press in late 2021.