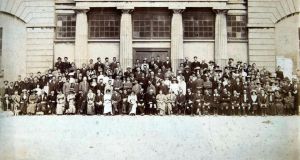 The 100-year-old Galway town hall photograph, which presents a ‘who’s who’ of the 1916 Rising

A “who’s who” of Irish revolutionaries is captured in a 1913 photograph taken in Galway – and found in a family attic almost a century later.

Half of the signatories of the 1916 Proclamation, and three future presidents of the new State, are identified in the image, a print of which has been presented to the city’s Town Hall Theatre.

Pádraig Pearse, Seán Mac Diarmada, Éamonn Ceannt, Douglas Hyde, Seán T O’Kelly, Éamon de Valera, Pádraic Ó Conaire and Constance Markievicz are among those in the original image, discovered in a box in the attic of the Curran family in Dublin.

Relatives of the Currans are also among the 164 people photographed attending a Gaelic League national convention. The image was shot outside what was then the town hall – now a theatre.

At first, the family thought it was taken at the Gaelic League Oireachtas in 1914 and searched for a match for the building in Kerry. When they confirmed that it was Galway, and 1913, they decided to mark the centenary by presenting a print to the theatre.

“We think it is only right that it should return to the place where it was taken, to be enjoyed by the people of Galway and the public at large,” the Curran family has said, paying tribute to the assistance they received. “We now look forward to perhaps the public assisting us identify the few remaining names.”

The 1913 Gaelic League national convention was held as part of the week-long Oireachtas or national cultural festival that summer, the first time the “parliament of the Gaels” was held outside Dublin. Galway city and county had some 50 per cent of the island’s native Irish speakers at that point.

“That Oireachtas was a rallying point for many of the nationalists who later led the rebellion of Easter Week ,” Colm Ó Gaora, Connemara author of Mise, recalls.

Ó Gaora, also in the photograph, was sworn into the IRB at the Galway event by Seán MacDiarmada. The picture is on display in the Town Hall Theatre foyer in Galway.