1916 centenary: The day a nation stood proud and remembered

Miriam Lord: Easter Rising commemorations resulted in a truly great day for Ireland and the Irish 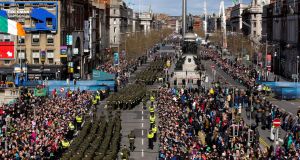 Members of the Defence Forces march through Dublin as part of the programme of commemorative events to mark the 100th anniversary of the Easter Rising. Photograph: Maxwells/AFP/Getty Images 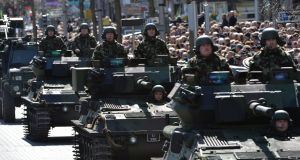 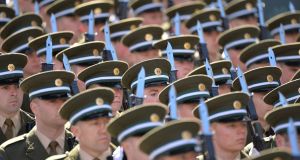 At midday, they lowered the flag. And in the reflective silence, a nation stood proud and remembered.

This was something special.

It was truly a great day for Ireland; a great day to be Irish. Thousands upon thousands of people lined the streets of the capital. They came from every part of the land and far beyond.

We had often wondered what might happen, 100 years on from the Easter Rising of 1916. How should we treat this often contentious milestone in our history?

It could have been awful: Easter 2016 – a terrible bunfight is born. But yesterday’s dignified and uplifting commemoration confounded the cynics. In its tone and execution, it hit all the right notes.

The centrepiece of the day’s events was a State commemoration ceremony outside the GPO.

It was followed by a military parade – today’s Óglaigh na hÉireann – marching to honour all those who died.

With the passing of the decades, and so many difficult years, the citizens who poured into town arrived with a confidence which comes with sufficient clear water between them and conflicts past.

Families unfurled their flags and wore their colours with a deep sense of national pride.

It wasn’t triumphalism at play, but rather a chance to stand with each other and mark a significant chapter in their beloved country’s story.

At noon on O’Connell Street, the ceremony began. President Higgins had inspected the guard of honour, after the acting Taoiseach, the Minister for Defence and the Lord Mayor of Dublin had done the same.

Across the road, on the roof of the former Imperial Hotel, flew the Starry Plough of James Connolly’s Irish Citizen Army.

The dignitaries – former presidents and taoisigh, politicians, members of the judiciary, diplomats and the rest of the great and the good – were in place.

First, the Tricolour was lowered to half mast. Then Fr Séamus Madigan, Head Chaplain of the Defence Forces, stepped forward to read a prayer.

He asked God’s blessing for “all the courageous people of Ireland who dared to hope and dream of a brighter tomorrow for our country and all of its citizens.”

The huge crowd listened in respectful silence as he spoke of “a new song of compassion, inclusion and engagement, a song of listening, social justice and respect for all, a song of unity, diversity, equality and peace, a song of céad míle fáilte and of care for our environment.”

A new day was beginning for Ireland and her “frail heart” and “frayed history”.

And he prayed for “all those who have suffered in the Troubles of the past century”.

Four children, representing the four provinces, placed bouquets of daffodils beside the place where Pearse read the Proclamation. There were white Easter lilies there too.

You could see people mouthing the words: “But come ye back when summer’s in the meadow Or when the valley’s hushed and white with snow ‘Tis I’ll be there in sunshine or in shadow Oh Danny Boy, Oh Danny Boy I love you so...”

It nearly finished us entirely.

Capt Peter Kelleher from Douglas in Cork strode forward and stood in front of the portico. He held out the Proclamation and began to read.

“Irishmen and Irishwomen: In the name of God and of the dead generations from which she receives her old tradition of nationhood, Ireland, through us, summons her children to her flag and strikes for her freedom . . .”

It took the officer more than four minutes to read it, and at the end, he called out the names of the signatories.

When Capt Kelleher finished the list, the crowd applauded.

In a little side street next to the GPO, an old man stepped from a car and stood up straight, holding his trilby hat by his side.

Former taoiseach Liam Cosgrave, his daughter Mary with him, stayed there until the ceremony concluded. He will be 96 in three weeks.

“My father and his brother were both sentenced to death in 1916. My step-uncle was shot dead by a British soldier, he was only 19,” he told us.

There was no way he was going to miss the commemoration. He’ll be at the wreath-laying ceremony today at St James’s Hospital, site of the South Dublin Union where his father, WT Cosgrave and his brother Philip were stationed.

After the reading of the Proclamation, the band played a rendition of Misé Eireann and then Micheal D Higgins was invited by Enda Kenny to lay a wreath on behalf of the Irish people in honour of all those who died.

Finally, that lip-quivering moment when buglers sound the Last Post and every ounce of patriotic pride is exhausted.

The national flag was hoisted full mast, rising above Hibernia with her gold spear and harp, fluttering in the sunshine.

Then the band struck up a spirited reveille before going straight into a rousing rendition of the national anthem.

The city looked great. The rain stayed away. Everything looks good when the sun shines.

It glinted off the silver spire and the shiny buckles and buttons of the men and women marching in the military parade.

They were joined by the members of the emergency services, taking their rightful place in the procession.

There were hats, flags, scarves and T-shirts on sale and quite a few of the St Patrick’s Day feather boas were taken along for another outing.

There were the blue berets of the UN peacekeepers and the clipped feathered hackles on the pipers’ caps and the yellow waders of the lifeboat crews and the smart new uniforms of the Garda band and rows of forty medals across big chests.

Shelia O’Leary (94) from Clontarf came to honour her father Thomas Byrne, who fought in the GPO. She carried a box containing all his medals.

“Dublin Remembers” read the banners all along the street.

And it was great.