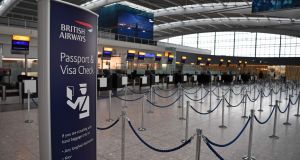 Some 10,000 passengers on British Airways flights in and out of Ireland are expected to be affected by a two-day strike at the airline which began on Monday.

Flights to and from Heathrow Airport in London appear most affected in the row between BA and the pilots’ union Balpa.

About eight flights each day from Dublin to Heathrow, as well as corresponding inbound flights, have been cancelled.

The airline is attempting to accommodate passengers between Heathrow and Ireland on Aer Lingus flights.

Flights between Dublin and London City Airport, which are operated by Stobart on behalf of BA, are still listed to operate. The 8.10am flight from London City landed ahead of time and other flights throughout the day remain on schedule.

But intending passengers who are booked to make long-haul connections from the UK could face misery when they land, as British Airways has announced the cancellation of more than 1,500 flights worldwide - making the industrial action the largest strike in the company’s history.

At Shannon Airport, Monday morning’s inbound flight from London City Airport due to land at 11am has been cancelled, as has an 11.50am BA flight from Shannon to New York.

Code share flights between BA and Aer Lingus on the Belfast City Airport route to the UK remain scheduled.

All intending passengers have been advised to check their flight online or with the airlines, but not to turn up at airports if their flight is cancelled.

About 280,000 people are expected to be affected altogether by the two-day strike which BA said may cost the airline close to €100 million.

Balpa has said further strikes could be implemented before the end of the year in the increasingly acrimonious dispute which has already seen the pilots reject an 11.5 per cent pay rise, taking their total pay package to around €220,000 a year.

On Friday, the airline emailed 4,300 pilots warning that strike action would be a “serious breach” of their contracts.

Balpa accused the airline of “breaking agreements and threatening pilots who strike, which is bound to make matters worse”.