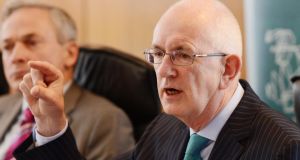 The head of the IDA Ireland has strongly denied allegations that Ireland is a tax haven, after the US Senate was told yesterday that technology company Apple had negotiated a 2 per cent tax rate with the Government.

Barry O’Leary said the Government had not negotiated any special deal regarding corporation tax with Apple, which employs around 3,000 people in Cork.

“Quite clearly it is very, very important to state that there is no special deal for Apple or any other company. I’m certainly in a position to say that nothing like that has been agreed by the Irish Government. That’s definitely not the case,” he said during an interview on RTÉ radio this morning.

“There are many countries that have good tax offerings, including individual states in the United States and countries like Luxembourg, Belgium, Holland and the UK increasingly.”

Mr O’Leary added that the controversy could put Ireland in a positive light, by showing what the country has to offer.

“I think we will continue to win a significant amount of foreign direct investment and if you listened yesterday to the CEO of Apple Tim Cook, he was praising the activities that they have in Cork, about the skill base that they have, about how they service the European, Middle East and African market, so in actual fact this is highlighting what you can do with Ireland provided you put substance in, rather than the passive operations.”

Minister for Jobs, Enterprise and Innovation Richard Bruton said the Government will not apologise for having a competitive tax code.

“We make no apologies for having a regime that’s designed to promote employment in this economy. It’s a regime that we’ve had for close to 50 years to be open to foreign investment and to have a tax code that is sensitive to their needs. Fair and transparent and clear for all to see,” he said.

“Our code is absolutely fair. It’s competitive. We are in a fiercely competitive environment when you’re chasing mobile investment. We have a big base of companies who are operating here, not just for tax reasons, but because of the talent and the technology.

“I think this can end well. I think we can deal with those harmful elements that have crept into the way companies move their profits between countries, but I think we have to accept that different countries will have different tax codes and that’s absolutely legitimate.”

UCC to hold virtual freshers’ week despite calls to cancel over Covid-19 fears 20:40
Assembly members call for equivalent of Helen’s Law in Northern Ireland 20:24
Rafael Nadal up and running as he bids for 13th French Open title 20:23
WHO to offer 120 million cheap coronavirus tests to developing world 20:21
State ‘should bail out’ distressed homeowners 20:10