Inquest told of emergency Caesarean carried out on Nigerian-born woman 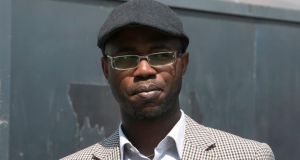 Abiola Adesina, the partner of Bimbo Onanunga, at the Coroner’s Court inquest into her death. Photograph: Gareth Chaney Collins

Doctors treating a woman who died after being induced to deliver a stillborn child believed her pain was caused by the early stages of labour, an inquest heard.

They did not discover that 32-year-old Nigerian-born Bimbo Onanuga’s uterus had ruptured until an emergency Caesarean section was carried out after she went into cardiac arrest at the Rotunda Hospital on March 4th, 2010.

Despite the emergency procedure Ms Onanuga, a mother of one who lived in Finglas, Dublin 11, with her partner Abiola Adesina, died later that night.

Dublin Coroner’s Court previously heard she was 30 weeks’ pregnant when Rotunda doctors confirmed the absence of a foetal heartbeat.

Medically induced labour was begun and she was discharged. She returned to the hospital two days later complaining of abdominal pain. This was considered normal.

The following morning Ms Onanuga was given her first dose of misoprostol, an ulcer medication commonly used for labour induction. The court heard there were licensing issues with misoprostol’s use in inducing labour but it was widely employed for this purpose by obstetricians in Ireland.

At the resumption of the inquest, Dr Louise Fay, assistant master at the Rotunda at the time, said she had examined the woman at about 2.30pm at the request of a midwife.

Labour had not yet been established and she recommended gas for Ms Onanuga’s pain, she said. She also noted that some vaginal misoprostol administered to Ms Onanuga that morning had not fully dissolved but said this was not an issue of concern. When questioned about Ms Onanuga’s pain by barrister for the family Dr Ciaran Craven, Dr Fay said it was consistent with an induced labour. “The induction process can start uterine activity which can be quite painful,” she said.

On opening the abdominal cavity, she discovered a uterine rupture with “massive” internal bleeding. The inquest was adjourned to November 5th.