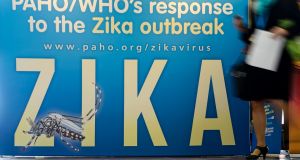 A banner on the Zika virus outbreak on display at the opening of the World Health Assembly, with some 3,000 delegates from its 194 member states attending, on May 23rd, 2016 in Geneva. Photograph: Fabrice Coffrini/AFP/Getty Images

Zika virus has been added to the list of notifiable infectious diseases that must be reported to Irish authorities.

The disease has been linked to birth defects discovered after pregnant women contracted it.

Outbreaks, linked largely to mosquito bites, have so far mainly hit countries in the Americas.

The move will allow health authorities to investigate any cases, seek to prevent the spread of the disease and facilitate efforts to combat early outbreaks. The Health Protection Surveillance Centre has set up an advisory group on the disease.

According to the Department of Health, Ireland’s environmental conditions “do not support the natural reservoirs or vectors of the Zika virus” (ie mosquitos) and as a result the risk of transmission is considered low.

The department is advising Irish people planning travel to countries where Zika is present to seek advice before going and to take precautions against infection.

According to the World Health Organisation, there is strong scientific consensus that Zika can cause the birth defect microcephaly in babies, a condition defined by unusually small heads that can result in developmental problems.

In addition, the agency said it could cause Guillain-Barré syndrome, a rare neurological disorder that can result in paralysis.

People infected with Zika may have a mild fever, skin rash, conjunctivitis, muscle and joint pain and fatigue that can last for two to seven days. As many as 80 per cent of people infected never develop symptoms.

The symptoms are similar to those of dengue or chikungunya, which are transmitted by the same type of mosquito.

Zika outbreaks have been reported in at least 47 countries or territories, most of them in the Americas, according to the US Centers for Disease Control and Prevention (CDC).

Brazil has been the country most affected.