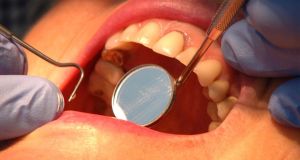 The dentist agreed to refund the €350 the woman paid to have the root removed as a gesture of goodwill. Photograph: John Giles/PA Wire

A patient was refunded €350 after she complained to the Dental Complaints Resolution Service (DCRS) about her treatment for a complicated tooth extraction.

The woman went to her dentist to have a painful tooth removed. She told him that she planned that after the extraction she would get an implant, an artificial tooth root placed in the bone where a tooth has been lost, so a replacement crown or bridge can be affixed.

When the woman’s tooth was removed, the dentist showed it to her and assured her it had been fully extracted. She went back to the dentist a week later still in pain and the dentist told her it would pass.

After a month, the practice called her for a follow-up examination. An X-ray was taken and it showed a piece of root had been left behind when the tooth was extracted. The woman was told it would need to be surgically removed, the procedure would be complicated and she might have to wait up to a year before the socket would be healed enough to take an implant.

The woman was upset because she had heard the best time to get an implant was between three and six months after extraction.

She was referred to the practice’s oral surgeon and charged €350 for the root removal. The surgeon said part of the bone had already been extracted during the first procedure and an implant might not be possible.

The patient complained to the DCRS.

She said she was particularly unhappy that she had to pay €350 to have the root removed. She asked for this money back and later asked the dentist to pay for a bone graft to facilitate an implant.

The dentist responded that what had been meant to be a simple extraction became a surgical one. He agreed to refund the €350 she paid to have the root removed as a gesture of goodwill.

He also said the oral surgeon could not remember telling the patient she would not be able to have an implant put into the site in the near future.

The dentist and the surgeon both told the patient she should seek the opinion of a specialist. The dentist said he hoped this would clear up any misunderstanding.