‘Eat less, move more’ mantra all very well, but it doesn’t work like that, says professor 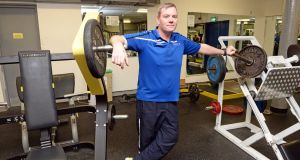 Five years ago, Brendan Quinn (above) started to gain weight, rapidly and inexplicably. Within a few years, he went from 76kg to 120kg without any outward change in his diet or activity level. File photograph: Eric Luke/The Irish Times

As much as 40 per cent of people’s ability to control weight may be down to their immune system, new research involving Irish scientists has found.

The discovery could explain why most people struggle to lose weight, despite exercising more or eating less.

The body interprets a sudden loss of weight as a threat to survival and deploys the immune system as a defence mechanism, the research by a team of Irish, American and Canadian researchers suggests.

The discovery, published in the journal Cell Nutrition, serves to emphasise the importance of preventing weight gain in the first place, according to Prof Donal O’Shea, endocrinologist at St Vincent’s University Hospital and one of the authors of the research, which was funded by the Health Research Board.

It may also open up novel areas for treating weight loss, as well as enhancing scientists’ ability to improve existing hormone treatments.

“We know that once weight is gained, for the majority of people, it is very difficult to lose that weight,” says Prof O’Shea. “It is too simplistic to say eat less, move more and the weight will come off. It doesn’t actually work like that.

“The body has a very powerful reaction to defend against weight loss, which we now know involves the immune system.”

The immune system is normally thought of as guarding against infection and diseases. However, in evolutionary terms, a sudden or rapid weight loss could be a more immediate threat to survival.

“This immune system response contributes to why people struggle to lose weight, despite their best efforts to control calories and do exercise. Our findings give us a much better understanding of why this is so and they illustrate the dynamic role the immune system plays in regulating body weight.”

The researchers focused on the role played by a very common immune cell known as the invariant natural killer T cell (iNKT cell).

Often described as the Swiss army knife of the immune system because it does so many jobs, this cell plays a key role in setting off a complex chain of events that regulate and enhance weight loss, according to lead author Dr Lydia Lynch, professor at Harvard Medical School and Trinity College Dublin.

The iNKT cell is needed to help fat cells make a small protein called fibroblast growth factor-21, (FGF-21) which triggers the body to turn white fat into a much healthier brown fat. This browning of white fat uses large amounts of energy, leading to increased metabolic rate and weight loss.

“We know that people who are obese often have sluggish immune systems and a lower amount of these iNKT cells,” says Dr Lynch. “With fewer iNKT cells, the body doesn’t make FGF-21, and this prevents the body from converting white fat to change it into brown fat.”

Stimulating the body to produce iNKT cells can lead to increased browning of white fat and, consequently, greater weight loss.

Brendan Quinn is a fitness coach and cardiac rehabilitation instructor who has trekked twice to Everest base camp. A life-long gym enthusiast, he is not the sort you expect to become obese, let alone overweight.

Five years ago, however, he started to gain weight, rapidly and inexplicably. Within a few years, he went from 76kg to 120kg without any outward change in his diet or activity level.

“Nothing had changed in my life. I was still eating and living healthily, and yet nothing I did to try to stop the weight gain made any difference,” recalls Quinn, from Carrickmines in south Dublin.

He tried cutting out the carbs and switching from cardio- to resistance-based exercises, but to no avail. “I grew mentally exhausted worrying about getting heart disease or diabetes, and lost energy.

“Friends said it was just a middle-aged spread but I didn’t buy into that, because I knew I was eating and exercising sensibly,” says Quinn (44). “But I felt very conscious about it.

“I felt I couldn’t work in the fitness industry any more. There’s definitely a stigma to being obese.”

Finally, last year, he shared his concerns with his GP. She recommended he see Prof Donal O’Shea, who is one of the country’s leading experts in obesity.

Dr O’Shea suggested Quinn’s weight issues may result from an immune system disorder he suffers from. Chronic inflammatory demyelinating polyneuropathy occurs when the immune cells incorrectly attack the nerves in the body.

Quinn was put on a daily injection regime to boost his immune system and suppress appetite, with promising results. He lost 12 kg in the first five weeks, and a total of 23 kg since he started treatment five months ago.

“I’m delighted,” says Quinn, adding that he hopes to shed another 10kg and return to his former weight before stopping the medication.