Plans involved establishing number of agencies to replace the HSE 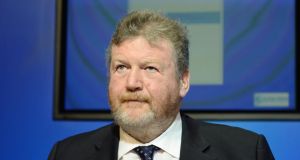 Department of Health officials told Minister for Health Leo Varadkar on his appointment in July that plans for implementing health service reforms drawn up under the tenure of his predecessor James Reilly were “unworkable”.

In November 2012 the Government approved a three- stage strategic reform plan for the health sector, known as “future health”. The crucial second stage of this programme involved the dissolution of the Health Service Executive and the division of the health service between purchasers and providers. This was to lead ultimately to the establishment of a system of universal health insurance.

To bring this about, the original proposals envisaged the setting up of a number of different bodies such as a healthcare commissioning agency, a healthcare pricing office, a patient safety agency, the establishment of revised structures for primary, social and mental healthcare as well as the transformation of hospital groups into trusts.

Briefing material prepared by Department of Health officials for Mr Varadkar, dated July 9th, and published tonight, said there had been a number of policy documents published containing recommendations for the proposed new structures to follow the abolition of the HSE. “However, if these policy documents were implemented in full, it would lead to a wide range of new statutory organisations.

Early last month, Mr Varadkar announced he was postponing the abolition of the HSE, saying it should “remain in place at least until all of this has bedded down”. He also said he was delaying the introduction of universal health insurance.

In February, the Department of Public Expenditure and Reform also criticised what it described as a “proliferation of quangos” under Dr Reilly’s plans for universal health insurance.

Last night a spokesman for Mr Varadkar said: “Based on briefings the Minister received on his appointment, and based on his own considerations, he took a view on a number of matters. He announced that his priority is to bring stability to the service and to get a reasonable budget in place. It was not the appropriate time to proceed with the dissolution of the HSE, as more work needs to be done in the interim on the new structures. However, when that work is concluded, that is still the intention.”

Separately, the Department of Health told Mr Varadkar that unless the Government provides supplementary funding to the health service this year, service levels would have to be reduced if a financial break- even was to be achieved this year.