Total ban on sunbeds not possible due to EU rules, says Simon Harris 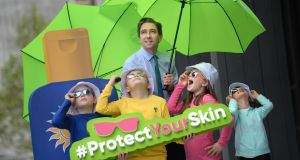 Minister for Health Simon Harris has said he would like to see sunbeds banned and sun cream exempted from VAT as part of measures to combat skin cancer.

However, the Minister admitted he is powerless to effect these changes due to EU-wide rules.

Launching the first national skin cancer prevention plan on Monday, Mr Harris said the effectiveness of current laws on sunbeds would be examined and strengthened if possible. Children were banned from using sunbeds in 2014 but Mr Harris said an outright ban was not possible “just as we couldn’t ban cigarettes”.

Sun cream is currently subject to 23 per cent VAT. The EU says this cannot be varied as it is not listed as a pharmaceutical product. However, future changes that would give member states more say on VAT rates could open up the possibility of a lower rate being applied to sun cream in Ireland.

The plan aims to tackle the most common cancer in Ireland, with over 11,000 cases a year, and is targeted at vulnerable groups including children, those involved in outdoor pursuits and sunbed users.

People should limit the time they spend outdoors when ultraviolet light is strongest, between 11am and 3pm in the months of April to September, the plan suggests. The covering of skin, the use of minimum factor 30 sun cream (factor 50 for children) and the wearing of broad-brimmed hats is also recommended.

“With half of all Irish adults getting sunburned last year, we need a radical rethink on how we think about the sun and tanning,” the Minister said. “What people really need to know is that most skin cancers could be prevented and the behaviours that we can adopt to protect our skin and our children’s skin.”

Most Irish people have fair skin. They burn easily and tan poorly so are particularly vulnerable to UV damage and, as a result, are at a higher risk of skin cancer.

UV exposure during the first 10-15 years of life makes a disproportionately large contribution to the lifetime risk of skin cancer. Severe sunburn during childhood – three or more instances before the age of 20 – is associated with a two- to four-times higher risk of developing melanoma in later life.

Mr Harris said it was alarming that so many people were aware of the risk involved from sunburn but were still prepared to take them.

Nine per cent of people take no skin protection measures, according to a survey commissioned by the National Cancer Control Programme. Two-thirds reported feeling a suntan made them feel more healthy, although 52 per cent agreed that “tanned skin is damaged skin”.

Three-quarters of respondents said they were aware of the risk of skin cancer from sunbeds.