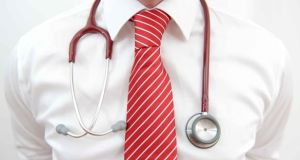 The holding company behind the National Association of General Practitioners is to go into voluntary liquidation.

However, the organisation says it is seeking to link up with an established trade union to continue to represent family doctors.

The trade union Unite said on Wednesday that it had met the association and contact was continuing.

The doctor’s group has been in turmoil in recent weeks following the sudden resignation of its president and most of its council members over governance issues.

The association has a twin-track structure: a holding company dealt with its business arrangements, such as membership and bill-paying, while a separate strand, known as the Alliance of Family Doctors, was involved in industrial relations matters.

Chief executive Chris Goodey said on Wednesday that the holding company was to go into voluntary liquidation. He said talks were under way with an established trade union affiliated to the Irish Congress of Trade Unions about a link to allow the representation role to continue. He said he would not be involved with the organisation in the future.

The association was successful in signing up members, with 2,000 doctors joining in recent years, but it was not directly involved in the GP contract negotiations between the Government and the Irish Medical Organisation, the other organisation representing GPs.

When agreement was reached in these negotiations last March, it lost about 200 members, precipitating a financial crisis that had been looming since the previous year. It recorded a deficit of €114,000 in the year to March, but was owed €215,000, much of its outstanding membership dues.

At a council meeting last April, Mr Goodey offered to resign from his €120,000-a-year post, and this was accepted. However, two weeks later he was reappointed, and 13 of the 16 council members resigned.

According to Mr Goodey, he had organised a financial rescue package to deal with the organisation’s financial problems, and to pay all creditors, but this was scuppered by “leaks” in the media.

“Now the €212,000 that we are currently owed by members is impossible to collect because of the negative publicity. That has effectively left us facing insolvency,” he told the Irish Medical Times.

Association chairman Dr Andrew Jordan said: “The rescue package has now been pulled from under us because we can’t trade.”