Spinraza is only treatment available for those with spinal muscular atrophy 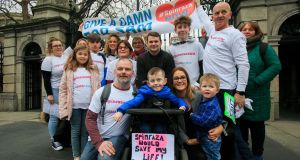 Protesters at Leinster House, Dublin in February called for the HSE to approve Spinraza for children who have spinal muscular atrophy. Photograph: Gareth Chaney/Collins

The Health Service Executive drugs group has again decided against approving the only treatment on the market for the rare muscle-wasting disease spinal muscular atrophy (SMA).

The drugs group voted by a narrow majority last week against reimbursing Spinraza, despite a revised price application by the manufacturer, Biogen.

Since then, the drug has been approved for use in the UK’s national health service, leaving Ireland in an “isolated position”, HSE director general Paul Reid acknowledged.

The application by Biogen will now be considered by the HSE leadership team in early June, he told the Oireachtas health committee.

Discussions with the manufacturer in relation to the drug’s cost-effectiveness would continue, he said. The HSE will also consult with the Department of Health in relation to the funding available for the drug, he told Sinn Féin Senator Rose Conway-Walsh.

Ms Conway-Walsh said it was “wholly unacceptable” that Spinraza was approved in the UK but not in Ireland. “Time is of the essence” as some of the children who urgently need the drug are “shutting down”.

Earlier this year, the HSE said the drug would cost about €600,000 in the first year to treat each of the 25 Irish children with the disease and €380,000 a year thereafter, “with an estimated budget impact in excess of €20 million over a five-year period”.

Biogen subsequently issues a revised price proposal it said was in line with the final price negotiated in other European countries that have approved the drug.

Spinraza is approved in 26 countries around Europe with just Estonia rejecting it.

As part of its submission, Biogen has previously provided the HSE with pricing for its portfolio of biosimilars – like-for-like therapies for expensive biologic drugs that have come off patent – that it says would offset the cost of Spinraza.

Families of children with SMA protested outside Leinster House in February, with members of most Opposition parties prominent among the attendance.